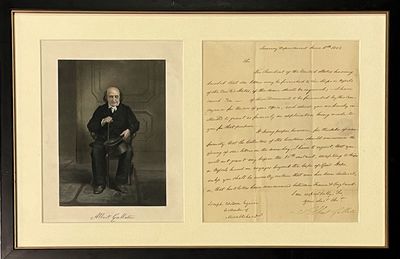 by Gallatin, Albert
[Washington DC]: Treasury Department, 1803. Single-page letter, in a secretarial hand, signed in ink by Gallatin, framed with an engraving of Gallatin. Letter measures 8" x 9-1/4." The frame, with engraving, measures 13-1/4" x 20," oblong. Near Fine.

A polymath and visionary, Gallatin was a dedicated public servant who applied his talents to a variety of issues in the late 18th and early 19th centuries. He was one of America's Renaissance Men. "In intellect he was the peer of any of his contemporaries-- as constructive as Hamilton, as astute as Jefferson, as logical as Adams, as comprehensive as Webster. And in that innate nobility of character which meets malice with charity and 'fears a stain as a wound' he was without a superior" [DAB]. A highly respected Jeffersonian Democrat, a reliable opponent of Federalist policies, Gallatin was the longest-serving Secretary of the Treasury. President Jefferson appointed him, and he served an uninterrupted tenure through both administrations of James Madison.
This Letter implements President Jefferson's instructions concerning the issuance of Sea-Letters to American vessels. The Sea-Letter, evidencing that the vessel was American and thus entitled to the protections afforded by the United States, was necessary in the event "that war has been declared, or, that hostilities have been commenced between France & England. (Inventory #: 37537)
$1,250.00 add to cart or Buy Direct from
David M. Lesser, Fine Antiquarian
Share this item
David M. Lesser, Fine Antiquarian Books LLC
Offered by