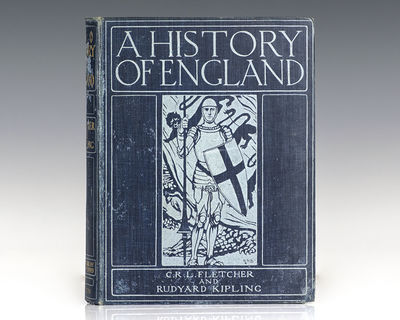 by Kipling, Rudyard and C.R.L. Fletcher
Oxford: The Clarendon Press, 1911. First edition of Kipling and Fletcher's history of Great Britain for boys and girls. Quarto, original cloth, illustrated with colored plates and maps by Henry Ford. In very good condition. Kipling and Fletcher's A History of England covers the history of Great Britain and the British Empire from the departure of the Romans, through Saxon England and the Middle Ages, the eras of the Tudors and Stuarts, the American Rebellion and Great French War, up until the Kingdom and Dominion of the Georges. Fletcher contributed most of the historical text with Kipling's assistance and contribution of 23 poems. Illustrator Henry Ford was best known for his work in Andrew Lang's colored Fairy books. (Inventory #: 123044)
$125.00 add to cart or Buy Direct from
Raptis Rare Books
Share this item