Life of Rev. Charles Nerinckx, Pioneer Missionary of Kentucky and Founder of the Sisters of Loretto at the Foot of the Cross 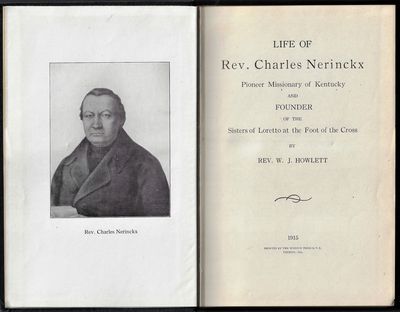 by Howlett, Rev. W.J.
Techny, IL: The Mission Press, 1915. First Edition. Hardcover. Very good. 447 pp, illustrated and indexed. Bound in blue cloth with gilt spine lettering. Light cover wear, lower corners bumped, internally clean and sound. Nerinckx (1761-1824) was a Catholic priest who immigrated to the United States from Belgium in 1804. According to Wikipedia, "Bishop John Carroll assigned him to assist Rev. Stephen Badin, the only priest in Kentucky, in 1805. The district given to his charge was over two hundred miles in length and covered nearly half the state. Nerinckx organized new congregations and oversaw the building of churches. Word of Nerinckx's efforts reached the Holy See. The Pope sought to appoint him Bishop of New Orleans, but Nerinckx refused the honor. With a focus on Catholic education, Nerinckx founded the Loretto sisters as a teaching order in 1812. It was formally designated the Friends of Mary at the Foot of the Cross. Nerinckx also founded the first congregation of black Catholic nuns in the United States in 1824. (Inventory #: 21760)
$150.00 add to cart or Buy Direct from Walkabout Books
Share this item

A History of the Military Transactions of the British Nation in Indostan, From the Year MDCCXLV. To Which is Prefixed a Dissertation on the Establishments Made by Mahomodean Conquerors in Indostan

Madras : Re-printed by Pharoah and Co , 1862
(click for more details about A History of the Military Transactions of the British Nation in Indostan, From the Year MDCCXLV. To Which is Prefixed a Dissertation on the Establishments Made by Mahomodean Conquerors in Indostan)

Then Sings My Soul, 150 of the World's Greatest Hymn Stories (Two-Volume Set)

Norwalk, CT : Easton Press , 2007
(click for more details about Then Sings My Soul, 150 of the World's Greatest Hymn Stories (Two-Volume Set))
View all from this seller>