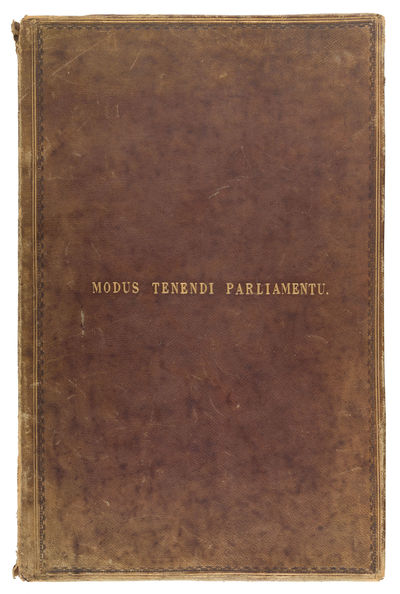 by Manuscript; Elsynge, Henry (The Elder)
1630. [London?, c.1626]. [London?, c.1626]. Pre-Publication Manuscript Copy of a Classic Manual on Parliamentary Procedure [Manuscript] Elsynge, Henry (The Elder). Modus Tenendi Parliamentu[m]. In Two Bookes. Composed by Henry Elsing. Esquire, Clerke of the Parliament. The Catalogue of the First Booke-Modus Tenendi Parliamentum Apud Anglos in Two Bookes-The First of the Forme, & All Things Incident-Thirtunto. The Second of the Matters Handled in Parliament. The First Booke Hath Eight Chapters. [London?, c.1626-c.1660]. 82 pp. Folio (13-1/4" x 8-1/2"). Nineteenth-century flexible pebbled calf, gilt rules and fillets to boards, gilt title "Modus Tenendi Parliamentu" to center of front board, gilt fillets to spine, all edges gilt. Light rubbing and minor scratches and nicks to boards, moderate rubbing and light fading to extremities with wear to corners, chipping to spine ends, joints starting at ends, front hinge starting at foot, twentieth-century sheet of typewritten notes tipped-in to front endleaf. Moderate toning, faint dampstaining to first third of text block, light soiling in a few places. Text in a single secretarial hand within ruled borders on wide-margined leaves, main text preceded by table of contents, doodles and penmanship exercises in later hand to front endleaf and foot of p. 82. $5,000. * A pre-publication manuscript copy of the first part of this important manual of Parliamentary procedure. Written in 1626, it originally circulated as manuscript copies. Edited, enlarged by his son, also named Henry Elsyng [1606?-1656], who was clerk to the House of Commons, it was published in 1660 as The Ancient Method and Manner of Holding of Parliaments in England. Being the Collections of Henry Elsynge, Esq. A work of great authority, it went through several editions into the eighteenth century. The text of our manuscript consists the first eight chapters, covering among other topics, "Of Summons," "Of Appearance," "Of Parliament Dayes," "Of the Speaker" and "Of Tryors and Receivors of Petitions." Manuscript copies are held by several libraries, but they are rare in commerce. No copies have appeared at auction since 2012. (Inventory #: 71980)
$5,000.00 add to cart or Buy Direct from
Lawbook Exchange
Share this item

Reports of Cases Concerning the Revenue, Argued and Determined..

1776
(click for more details about Reports of Cases Concerning the Revenue, Argued and Determined..)

The Statutes at Large, 37 Volumes in 39 Books, Macclesfield Library..

1762
(click for more details about The Statutes at Large, 37 Volumes in 39 Books, Macclesfield Library..)
View all from this seller>