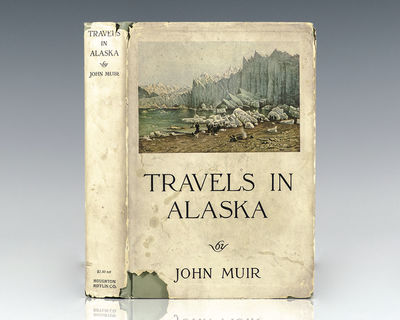 by Muir, John
Boston: Houghton Mifflin Company, 1915. First edition of the author's classic work. Octavo, original grey cloth lettered in white, color illustrated paper cover label, top edge gilt. Illustrated with several plates from photographs, including frontispiece with tissue-guard. Near fine in the rare original dust jacket with a small chip to the front panel. Travels in Alaska, by John Muir, reflects Muir's exuberance for life and almost everything he encountered in his many travels. In addition to being an ecologist and traveler, John Muir was a botanist and geologist, a fact which readers will be reminded of through his contemplations of the southeast Africa flora and the activity of glaciers. Travels in Alaska is John Muir's journal of his 1879, 1880, and 1890 trips to southeast Alaska's glaciers, rivers, and temperate rain forests. For Muir, the wilderness was a medicine or spiritual tonic. Physical impediments and frailties faded into the background when he was alone in the wilderness. Much of "Travels in Alaska" is given to glaciers, including their descriptions, their influence on the landscape, their geological record, the discovery of new glaciers, and other characteristics of these moving rivers of ice. When describing glaciers, John Muir offers descriptive powers unequaled among authors on nature, Time and space almost have no medium in this publication, utterly lost when gazing upon a glacier. (Inventory #: 125110)
$1,750.00 add to cart or Buy Direct from
Raptis Rare Books
Share this item