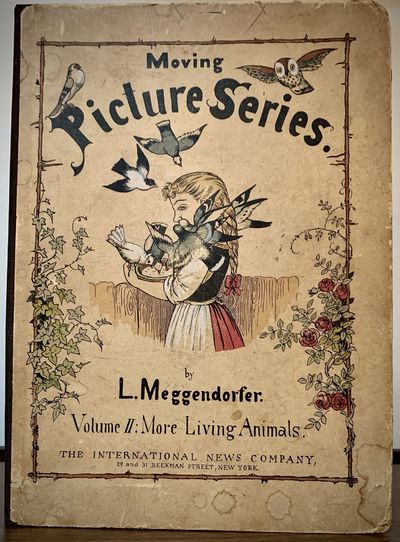 by Meggendorfer, Lothar
New York: International News Company, 1884. First American edition. Hardcover. Orig. publisher's pictorial boards in a multitude of colors, black cloth spine rebacked. Very good. 13 unnumbered pages. 32.5 x 23.5 cm. Pop-up book, six full-page chromolithographed plates, (The cart horse -- The flock of sheep -- The little girl and the doves -- The student and the dog -- The fox and the chickens -- The owl) -- Pictures taken from various editions published by J.F. Schreiber. Each with a movable tab to set the scene in motion, the levers moves up and down. All levers in working order. The text, rhyming poetry in English. The German edition, [Aus dem Leben], has the same front cover illustration. "There is little doubt that the most elaborate and ingenious movables ever produced were those of the German Lothar Meggendorfer (1847-1925) made during the 1880s and 1890s....the mechanisms and operations of Meggedorfer's books - not to mention the originality of the figures -- are far superior to any others published before or since. The devices that operated the various figures in his books consisted of a series of inter-connecting cardboard levers sandwiched between the coloured illustration on the front of the oblong leaf and the dummy pasted behind it. The animated limbs and heads were cut-out models on the front of the picture, and moving the tab set the whole scene in motion [see: HAINING, Movable Books, pp.65-73]. Some damp stains at lower cover, corner wear. (Inventory #: 22809)
$1,350.00 add to cart or Buy Direct from
Roy Young Bookseller
Share this item
Roy Young Bookseller, Inc.
Offered by