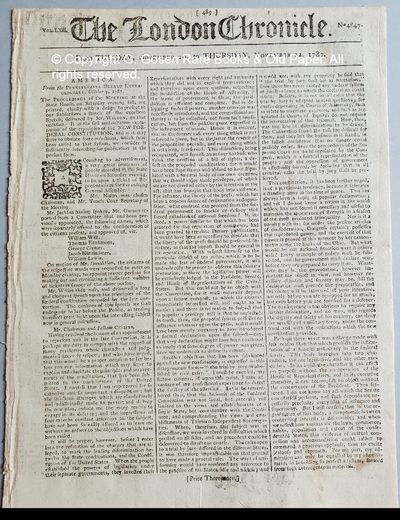 by James Wilson 1742 - 1798.
Wilson, James. Founding Father, Signer of the Declaration and the Constitution. 1742 – 1798. The London Chronicle. Vol. LXII, No. 4847. From Tuesday, November 20, to Thursday, November 22, 1787. Pages 489 – 496. Trimmed and disbound. Red stamp tax on the foot of page 492. Price Threepence. Housed in a hard folder and boxed. Fine.
Contemporary London coverage of Founding Father James Wilson's speech in Philadelphia, in the Statehouse yard on October 6, 1787, in which the principal architect of the Executive Branch explained the then-new federal constitution. One of only six men to sign both the Declaration of Independence and the Constitution, James Wilson, the first professor of American law, was tasked with teaching the first course in the American Constitution to George Washington and his Cabinet. The speech James Wilson gave on October 6, 1787 in defense of the Constitution reverberates today. On October 6, 1787, James Wilson defended the lack of a bill of rights as "... for it would have been superfluous and absurd to have stipulated with a foederal [sic] body of our own creation, that we should enjoy those privileges, of which we are not divested either by the intention or the act, that has brought that body into existence." (Inventory #: 419)
$950.00 add to cart Available from
Gosen Rare Books
Share this item

Deported Dancing Master. Two petitions to the Court of Assistants.