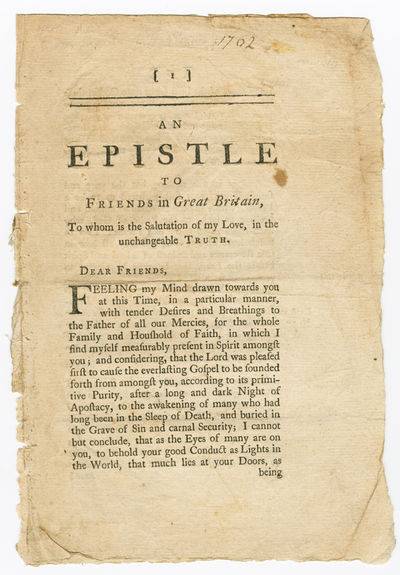 by [Nicholson, Thomas]: [Society of Friends]
[New Bern, N.C.: Printed by James Davis, 1762. 4pp. Dbd. Old folds, repair to gutter, light chipping to edges. Mild tanning and a few spots of foxing. Contemporary manuscript annotation on first page. Very good. An early and inspiring epistle from prominent North Carolina Quaker minister, Thomas Nicholson. This letter is one of encouragement, urging fellow Friends to remain free from the contamination of worldly striving, "lest the Love of this World, and the present Enjoyments thereof, should so far prevail in any of us, as to cause us to become careless in our Minds; from whence a Laodicean Lukewarmness will proceed, and we shall be in Danger of becoming conformed to this World, instead of being transformed by the renewing of our Mind." The letter is signed and dated in letterpress on p.4: "Thomas Nicholson. Little River in North Carolina, the 15th of the Ninth Month 1762," just as Nicholson was beginning to reassess his position on slavery. He eventually became a leading abolitionist within the Society, emphasizing the wrong that slavery does both to the enslaved as well to the owner. He also advocated against colonial laws that made it difficult to ensure permanent freedom for those he and other owners had emancipated.

Nicholson's was a well-known early Quaker family who fled England for North Carolina in the 1670s, thanks to North Carolina's early religious toleration laws. Nicholson (1715- 80) was born in Perquimans County, and became a successful landowner and merchant, as well as a popular missionary preaching throughout the Carolinas, New England, and England.

Printer James Davis established the first press in North Carolina in 1749, after the North Carolina General Assembly invited him to leave Virginia (possibly from William Parks' shop) and become the colony's first official printer. In addition to governmental publications, Davis also maintained a number of private jobs, including the colony's first newspaper, THE NORTH-CAROLINA GAZETTE, the first book by a native North Carolinian, and a number of other works.