The Lassie and Her Godmother": from East of the Sun and West of the Moon. 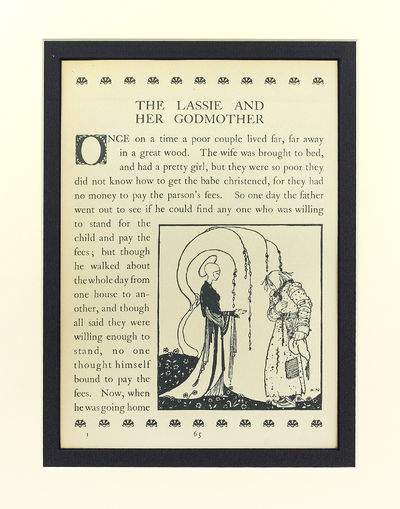 by Nielsen, Kay.
Single black and white print. New York: George H. Doran Company, 1914. Single black and white print, 5.75 x 8 inches, matted. Evenly toned, near fine. § A single page with an in-text illustration by Kay Nielsen from East of the Sun and West of the Moon (1914). Nielsen was born in 1886 in Denmark. He is one of the three major artists of the Golden Age of 20th century book illustration (along with Edmund Dulac and Arthur Rackham). He studied art in Paris and from that point on alternated his career between book illustration and theater design. He illustrated far fewer books than his famous contemporaries, but his masterful and magical images have had the same immense impact on the world of book illustration. His first books (Twelve Dancing Princesses, or In Powder and Crinoline in the UK) brought him his greatest fame. At this point World War I intervened, and Nielsen spent nearly a decade in Copenhagen in theater production. After the war he began to illustrate books again, and produced two additional successful works, Hans Andersen's Fairy Tales (1924) and Hansel and Gretel (1925). A remarkable set of 42 paintings he created to illustrate an unpublished edition of A Thousand and One Arabian Nights were only brought to light in 1973. (Inventory #: 124019)
$30.00 add to cart or Buy Direct from
John Windle, Bookseller
Share this item