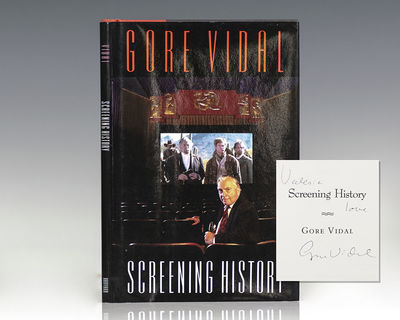 by Vidal, Gore
Cambridge, MA: Harvard University Press, 1992. First edition of this work by the award-winning novelist. Octavo, original cloth. Association copy, inscribed by the author on the title page, "Valerie, love, Gore Vidal." The recipient, Valerie Vidal was the author's sister. Vidal's father remarried in 1939 and had two children with his second wife; Valerie was born in 1946. Fine in a fine dust jacket. Jacket design by Lisa Clark. An exceptional association. Gore Vidal saw his first talking picture in 1929 when he was four years old. At age ten, the film A Midsummer Night's Dream whetted his appetite for all of Shakespeare's plays, and Mickey Rooney's Puck inspired his early fantasy about becoming an actor. Yet it was movies about history, albeit history as brought to life on the silver screen, that he remembers most vividly from his youth. Movies such as Roman Scandals, The Prince and the Pauper, and Fire Over England, in his words, "opened for me that door to the past where I have spent so much of my life-long present." Author of Burr, Lincoln, and other best-selling novels chronicling our experience, Vidal shows how history and fiction blend in the private and public worlds of his generation. In Screening History, he intertwines fond recollections of films savored in the movie palaces of his Washington, D.C., boyhood with strands of autobiography and trenchant observations about American politics. Never before has Vidal--a scion of one of our oldest political families--revealed so much about his own life or written with such marvelous immediacy about the real and imagined forces that have shaped America in the twentieth century. We see Vidal witnessing history as his grandfather is sworn in for a fourth Senate term during the Depression; we see him making history as a young airman of ten flying a Hammond Y-1 under the watchful eye of his father, FDR's Director of Aviation; and we journey back with him to America in the 1930s and 1940s, to theaters with names like the Belasco and the Metropolitan where the history screened for the nation's moviegoers often turned reality into fantasy, or into downright propaganda. Screening History is rich with anecdotes about Vidal's eminent family and shrewd insights about prominent figures known and observed. It captures the hold that movies have had on the American imagination and the mark they left on the mind of a youngster who grew up to become one of our best-known and most controversial literary figures. At times poignant, often bitingly funny, this is Gore Vidal at his best, inscribing his views on the American political scene from FDR to George Bush and on issues from the writing of history to the inability of movies to set history straight. (Inventory #: 126011)
$400.00 add to cart or Buy Direct from
Raptis Rare Books
Share this item