Field Guide to the Birds: Giving Field Marks of All Species Found in Eastern North America. 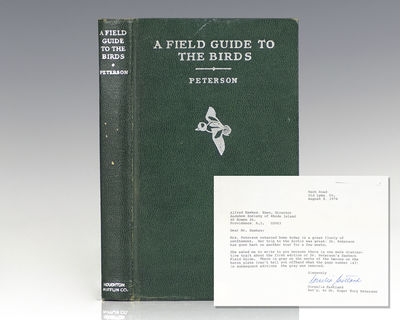 by Peterson, Roger Tory
Boston: Houghton Mifflin Company, 1934. First edition with the date on the copyright page of Peterson's first book. Octavo, original green pebbled cloth, illustrated with 4 color plates with printed overlays, 32 monochrome plates. In near fine condition. From the library of conservationist Emilie Reucke with her name to the front free endpaper. Also, included is a letter from Peterson's office regarding the issue points of the first edition. Roger Tory Peterson, one of the world's greatest naturalists, received every major award for ornithology, natural science, and conservation as well as numerous honorary degrees, medals, and citations, including the Presidential Medal of Freedom. The Peterson Identification System has been called the greatest invention since binoculars. "Many people have noted that Peterson changed the world because he made nature accessible to the general public. Before his Guide, bird watching was the province of the few, often done with bird remains in hand" (Eirik A.T. Blom). (Inventory #: 126099)
$2,000.00 add to cart or Buy Direct from
Raptis Rare Books
Share this item