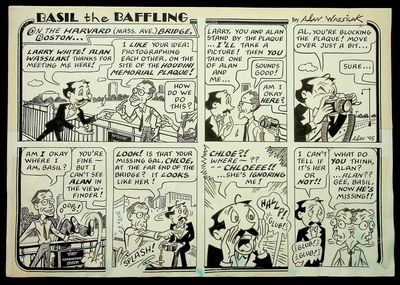 M-U-M is a magazine published by the Society of American Magicians.

"The Society of American Magicians, founded on May 10, 1902, in Martinka's famous magic shop in New York City, New York, is the oldest and most prestigious magical society in the world. For over a century it has promoted the ideals shared by Kellar, Houdini, Thurston and more than 50,000 others world-wide who have held membership in the society. Those ideals include the elevation of the Art of Magic, the promotion of harmony among magicians, and the opposition of the unnecessary public exposure of magical effects.

The S.A.M. offers the opportunity to unite and associate with leaders in the World of Magic - not only professionals, but amateurs, manufacturers, magic dealers, book authors and magic collectors. Through its monthly publications, annual conventions, and with almost 300 Assemblies throughout the world, the S.A.M. provides the necessary forum for the advancement of magic through discussions, lectures, research, performances, and exchange of magic secrets within the magic community. To promote those endeavors the S.A.M. presents awards and fellowships in recognition of outstanding achievement in the Art of Magic.

If you have a serious interest in the Art of Magic then you, too, can follow in the footsteps of Harry Houdini, Harry Blackstone, Jr., Siegfried & Roy, Lance Burton and David Copperfield by joining the most prestigious magical organization in the world - The Society of American Magicians." (Society of American Magicians). (Inventory #: 28739)
$105.00 add to cart or Buy Direct from Kuenzig Books
Share this item