Chinese labor in North America and Caribbean in 1880 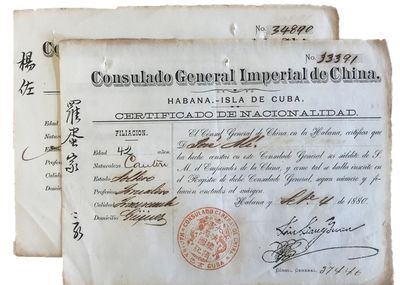 by Chinese labor , Cuba
Two official immigration registration forms, completed in manuscript by hand in Havana, 1880.Contemporary ink stamps. A set of 2 registration forms issued in 1880 by the Chinese Consulate in Havana, certifying the immigration registration and personal details of Chinese laborers in Cuba. Often the Chinese laborers were treated worse than black slaves and many fled their owners or committed suicide. Each form is completed with the name of the recipient, his age, place of origin, occupation, and place of residence. The men were given Spanish first names, The printed text states that, "El Cónsul General de China en la Habana, certifica que [blank] ha hecho constar en este Consulado General ser súbdito de S.M. el Emperador de la China, y como tal se halla inscrito en el Registro de dicho Consulado General, segun número y filiacion anotados al márgen." Each certificate approximately 6.5 x 8.25 inches. and is dated in 1880, and is stamped with the seal of the consulate in red and with the rubberstamped signature of the Chinese Consul General. Perforations at top edge where previously bound. Some soiling and minor chipping at edges. The forms are also all bear two ink signatures in Chinese.. These papers documents the import of Chinese labor to North America and Caribbean region in the 19th century. (Inventory #: 17217)
$850.00 add to cart Available from
Share this item
Max Rambod Inc.
Offered by