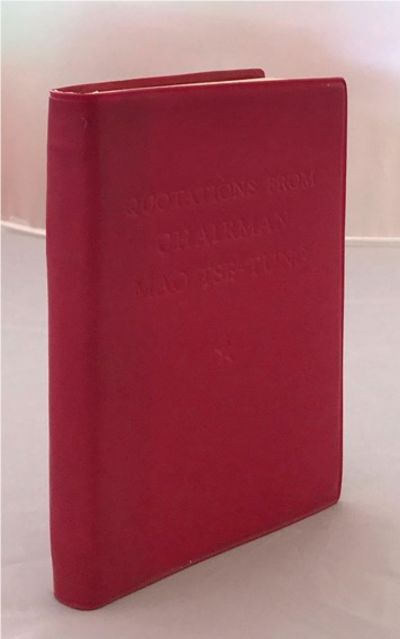 first edition
by Tse- Tung , Mao
Mao Tse- Tung. Quotations from Chairman Mao Tse-Tung Little Red Book 1966 First English Edition. Pocket sized book from Foreign Press, Peking, China, First Edition, 1966. First edition of Quotations from Chairman Mao, indicated by the words "First Edition 1966" on the back of the Title Page. Duodecimo, in the original iconic red vinyl, title to front cover in blind. With Lin Biao's calligraphic endorsement leaf and image of Mao inside. During the 1960s, the book was the single most visible icon in mainland China, even more visible than the image of the Chairman himself. In posters and pictures created by CCP's propaganda artists, nearly every painted character, whether smiling or looking determined, was seen with a copy of the book in his or her handBy the start of the Cultural Revolution in 1966, the red vinyl design had become symbolic of Mao's slogan "The East is Red". After Mao's death in 1976, circulation of the book was discouraged, with millions of copies were collected and destroyed. Very Good condition. A bit of shelf wear. Binding solid and square. Overall very good, (Inventory #: 17196)
$750.00 add to cart Available from
Share this item
Max Rambod Inc.
Offered by