Heaven and Hell (The North and South Trilogy No. 3) 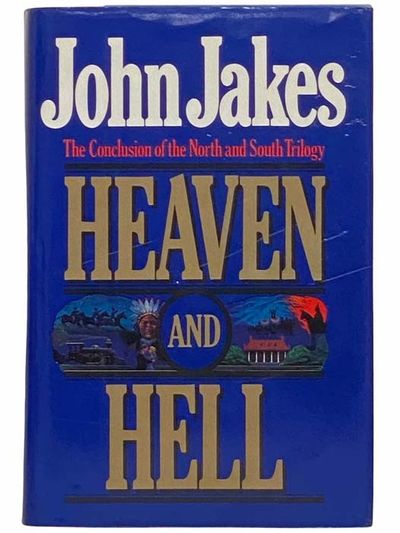 by Jakes, John
New York: Harcourt Brace Jovanovich, 1987. First Edition. Hard Cover. Good/Good. First edition. Ink notes on front endpaper. 1987 Hard Cover. We have more books available by this author!. 700 pp. "As one might expect, this final volume in Jake's North and South trilogy makes splendid reading. Dealing with Reconstruction as the earlier volumes dealt, respectively, with pre-Civil War rumblings and the war itself, this novel resumes the saga of the Hazards of Pennsylvania and the Mains of South Carolina, both families now sadly depleted and bound together as much by hate as love. The Union has triumphed but there's no peace, as radical northern Republicans seek to impose punitive rule on the South and succeed in bringing impeachment proceedings against President Johnson; the Ku Klux Klan goes its ludicrous and hideous way; and in the West, army generals, most notably Custer, savagely subdue the Indians. The principal fictional characters threading the accurate groundwork of major national events are, on the Hazard side, steelmaker George, his abolitionist sister Virgiliastet and his corrupt, incompetent brother Stanley who (significantly) goes into politics. In the Main family, there are Orry's octoroon widow Madeline, a prime target of the Klan, his unscrupulous sister Ashton and, most insistently and compellingly, Charles, whose adventures include scouting for Custer, until he becomes disgusted by the Washita Massacre, and, with Indian help, tracking the crazed abductor of his small son. Idealism and corruption, tenderness and brutality, innocence and insanity, all figure in the narrative, a highly colored amalgam of heaven and hell, with the latter predominating." -- Publishers Weekly (Inventory #: 2312924)
$6.00 add to cart or Buy Direct from
Yesterday's Muse
Share this item
Yesterday's Muse, Inc.
Offered by