Death and Money in the Afternoon: A History of the Spanish Bullfight 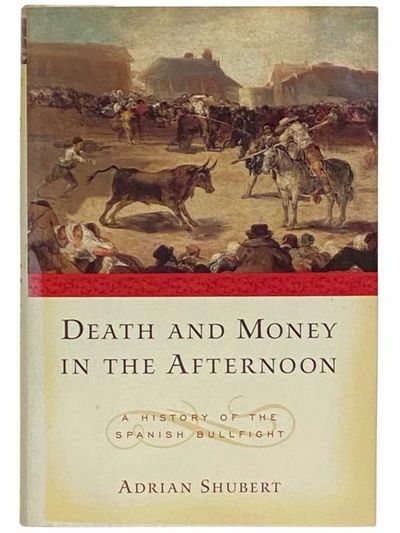 by Shubert, Adrian
New York: Oxford University Press, 1999. First Edition. Hard Cover. Good/Good. Faint smoke odor. Jacket stained on rear wrapper. Top edge of rear board stained. 1999 Hard Cover. 270 pp. "Bullfighting has long been perceived as an antiquated, barbarous legacy from Spain's medieval past. In fact, many of that country's best poets, philosophers, and intellectuals have accepted the corrida as the embodiment of Spain's rejection of the modern world. In his brilliant new interpretation of bullfighting, Adrian Shubert maintains that this view is both the product of myth and a complete misunderstanding of the real roots of the contemporary bullfight. While references to a form of bullfighting date back to the Poem of the Cid (1040), the modern bullfight did not emerge until the early 18th century. And when it did emerge, it was far from being an archaic remnant of the past--it was a precursor of the 20th-century mass leisure industry. Indeed, before today's multimillion-dollar athletes with wide-spread commercial appeal, there was Francisco Romero, born in 1700, whose unique form of bullfighting netted him unprecedented fame and wealth, and Manuel Rodriguez Manolete, hailed as Spain's greatest matador by the New York Times after a fatal goring in 1947. The bullfight was replete with promoters, agents, journalists, and, of course, hugely-paid bullfighters who were exploited to promote wine, cigarettes, and other products. Shubert analyzes the business of the sport, and explores the bullfighters' world: their social and geographic origins, careers, and social status. Here also are surprising revelations about the sport, such as the presence of women bullfighters--and the larger gender issues that this provoked. From the political use of bullfighting in royal and imperial pageants to the nationalistic "great patriotic bullfights" of the late 19th and early 20th centuries, this is both a fascinating portrait of bullfighting and a vivid recreation of two centuries of Spanish history. Based on extensive research and engagingly written, Death and Money in the Afternoon vividly examines the evolution of Spanish culture and society through the prism of one of the West's first--and perhaps its most spectacular--spectator sports. (Inventory #: 2312909)
$6.00 add to cart or Buy Direct from
Yesterday's Muse
Share this item
Yesterday's Muse, Inc.
Offered by