The Works of William Makepeace Thackeray. [Including The History of Henry Esmond, Vanity Fair, Pendennis, The Newcomes, and The Virginians]. 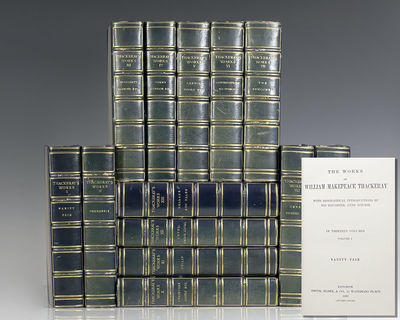 by Thackeray, William
London: Smith, Elder and Co., 1900-1902. The Biographical edition of the Works of William Makepeace Thackeray. Octavo, thirteen volumes bound in three quarter morocco over marbled boards by Maclehose with gilt titles and ruling to the spines in six compartments within raised gilt bands, tissue-guarded frontispiece to each volume. In very good condition. British novelist, author, and illustrator William Makepeace Thackeray was renowned for his satirical works, particularly Vanity Fair, a panoramic portrait of English society. Thackeray saw himself as writing in the realistic tradition, and distinguished his work from the exaggerations and sentimentality of Dickens. Some later commentators have accepted this self-evaluation and seen him as a realist, but others note his inclination to use eighteenth-century narrative techniques, such as digressions and direct addresses to the reader, and argue that through them he frequently disrupts the illusion of reality. The school of Henry James, with its emphasis on maintaining that illusion, marked a break with Thackeray's techniques. (Inventory #: 126381)
$1,500.00 add to cart or Buy Direct from
Raptis Rare Books
Share this item