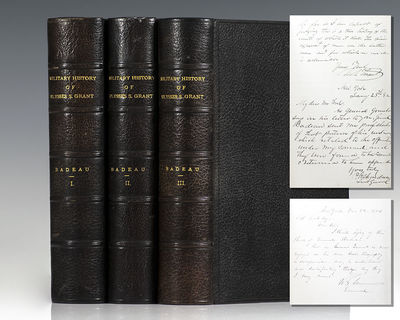 by Badeau, Adam. [Ulysses S. Grant; William Tecumseh Sherman; Philip H. Sheridan]
New York: D. Appleton and Company, 1881. First edition of Badeau's important "eyewitness estimation of Grant's performance during the war," with three autograph letters signed by the three most prominent Union Army Generals of the Civil War (Ulysses S. Grant, William Tecumseh Sherman, and Philip H. Sheridan) verifying the merit of its content bound in. Octavo, bound in full contemporary morocco with gilt titles to the spine, marbled endpapers, tissue-guarded engraved frontispiece portrait of Grant from a photograph by Gurney & Son. From the library of John C. Work with a gift inscription to him from his son to the front free endpaper. In his later work Grant in Peace (1887, chapter 51, p. 588), Badeau wrote of this very set: "Mr. Work had a copy of my Military History of Grant especially bound for his library, and asked General Grant to write something in it to attest his opinion of its merits..." The letters include an autograph letter signed and in the hand of Ulysses S. Grant which reads, "New York City Dec. 22d 1881 J. H. Work, Esq., "This book was reviewed by me, chapter by chapter, as it was being prepared for the publishers. It was submitted for a similar review also to Generals Porter & Babcock, two of the staff colleagues of the Author. In addition to this all those chapters treating of events in which Generals Sherman & Sheridan held detached commands, were submitted to those officers. The Author had access to the Government and captured & purchased rebel archives. He also read and consulted all that was published, on both sides, before and during the time he was writing this book with the view of getting this truth. So far as I am capable of judging this is a true history of the events of which it treats. The opinions expressed of men are the Authors own, and for which no one is responsible. Yours truly, U.S. Grant"; an autograph letter on the same page directly below Grant's signed by and in the hand of General Philip H. Sheridan which reads, "New York January 28th 82 My dear Mr. Work: As General Grant says in his letter to you, General Badeau sent me proof sheets of that portion of his work which related to the opperating [sic] under my command, and they were found to be correct & returned to him approved Yours truly P.H. Sheridan Lieut General"; and an autograph letter signed and in the hand of General William Tecumseh Sherman which reads, "New York Dec. 22, 1884 J. H. Work Esq. Dear Sir, I think highly of this book of General Badeau. But as General Grant is now engaged on his own Auto Biography a comparison may be more satisfactory than any thing I may record. W.T. Sherman General." Badeau would later use portions of Grant's enclosed letter to promote the 1885 reprint of this work by Appleton. In near fine condition. Lacking all, but one, of the engraved maps and plates. An exceptional set with noted provenance. American Union Army officer Adam Badeau's abilities a writer led him to prominence within the ranks first as a staff officer for Thomas W. Sherman, and later for Ulysses S. Grant. Though Badeau's admiration for Grant might suggest a lack of objectivity, historians have noted that "Badeau's style is matter of fact without the embellishment or glorification typical of some early works. The accuracy is impressive... The author does not digress or reflect on matters, so the volumes have a technical precision that is both valuable for its truthfulness... and for delivering an eyewitness estimation of Grant's performance during the war" (Eicher 486). First published between 1868 and 1881, this work has become particularly valuable for its first-hand accounts of the 1864 campaigns and the surrender at Appomattox. (Inventory #: 126037)
$55,000.00 add to cart or Buy Direct from
Raptis Rare Books
Share this item