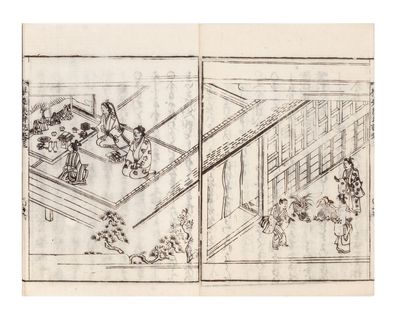 by KAIBARA, Chiken & Ekiken
Two full-page & eight double-page illus. in the text. 77; 39; 32; 46 folding leaves. Seven parts bound in four vols. 8vo, orig. blue patterned wrappers, orig. block-printed title labels on upper covers (several labels defective), new stitching. Osaka: Nisshindo, 1688. First edition of this uncommon work on traditional Japanese festivals, holidays, and rituals throughout the year. This book established the style of saijiki, which are richly detailed chronicles of the year's events, imbued with Chinese elements including Confucianism. Chiken Kaibara (1664-1700), and his uncle, the famous doctor Ekiken Kaibara (1630-1714), arranged this work by each season, describing all the festivals and holidays and seasonal events in great detail. It is somewhat akin - but only slightly - to what we in the West know as a farmers' almanac. Its qualities are much closer to the core of Japanese ritualism, explaining why and how each custom or ceremony is performed. It describes the origins of the festivals, rituals, and customs, based on earlier writings. Included in the records are lunar observations, descriptions of the farming and household activities through the year, and advice on curing seasonal illnesses. There are also extended passages on seasonal foods, with opinions about which are beneficial to health along with rituals to maintain one's health. The woodcuts depict seasonal events including ball games on New Year's Day, the hina dolls festival in early March, boys' day in early May, a festival in June at the Kamo River in Kyoto, tanabata in early July, the August moon festival (jugoya), an autumn chrysanthemum festival, observations of maple leaves' fall color in October and snow in the garden in December. It has long been thought that the artist of these fine woodcuts is Yoshida Hanbei. Nice, fresh set. Minor worming in margins of Vol. II and some unimportant worming in the fourth volume. (Inventory #: 7657)
$4,500.00 add to cart or Buy Direct from
Jonathan A. Hill, Bookseller
Share this item
Jonathan A. Hill, Bookseller, Inc.
Offered by