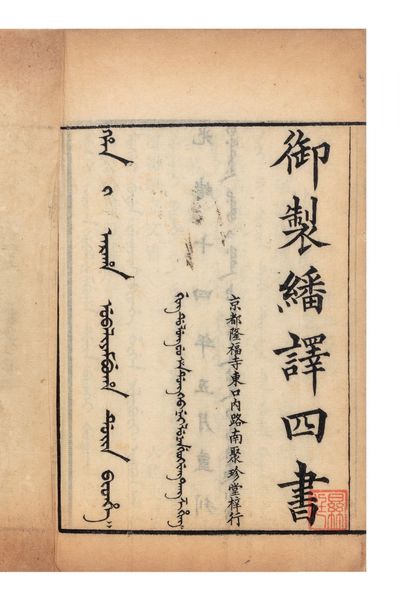 by QIANLONG, Emperor, sponsor
Trans. originally overseen by Ortai (or E'ertai). Parallel texts of Manchu & Chinese. 68; 61; 67; 116; 69; 66 folding leaves. Six vols. 8vo, orig. wrappers (some browning), new stitching. Jingdu [Beijing]: Ju zhen tang, 1888. A reprint of the famous Manchu-Chinese edition commissioned and sponsored by the Emperor Qianlong, of The Four Books of Confucianism, which, together with The Five Classics, make up the basic canon of Confucianism. During the Ming and Qing dynasties, The Four Books were made the core of the official curriculum for the civil service examinations. An intellectual and ardent Confucian, Emperor Qianlong ordered standardized, fully annotated translations of The Four Books and The Five Classics into Manchu that would reflect the emperor's own understanding of political philosophy and history. "He read and reread the classics and listened regularly to learned scholars expounding on their deeper meaning. His insistence on linguistic precision eventually provoked in him such dissatisfaction with the existing Manchu versions of the classic texts, which had been made in a hurry in the 1630s and 1640s, that he ordered completely new translations, to be published by the palace press."-Mark C. Elliott, Emperor Qianlong. Son of Heaven, Man of the World (2009), pp. 76-77. The first Qianlong edition of The Four Books was published in 1755; the editing was overseen by Ortai (Ch: E'ertai, 1680-1745), the leading Manchu minister to both Emperor Yongzheng and his son, Emperor Qianlong. Ortai was, until his death, the most powerful Manchu in China after the emperor. Nice set, preserved in the original publisher's chitsu (slightly worn). Paper inevitably lightly browned. (Inventory #: 7658)
$2,500.00 add to cart or Buy Direct from
Jonathan A. Hill, Bookseller
Share this item
Jonathan A. Hill, Bookseller, Inc.
Offered by