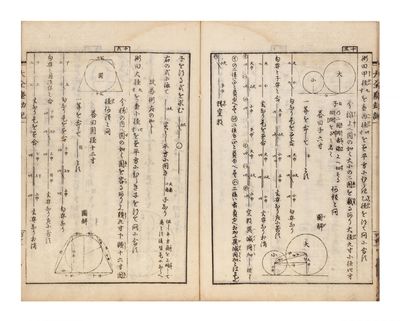 by YAMAMOTO, Kazen, HASEGAWA, Hiroshi, AKITA, Hodo, & OMURA, Kazuhide
Numerous geometrical woodcuts in the text. 2.5 p.l., 78-119 (but complete); 120-43; 144-72, [3] leaves of ads, .5 leaf of colophon; 33; 30; 33 folding leaves. Six vols. 8vo, orig. yellow wrappers, orig. block-printed title labels (labels rather rubbed), new stitching. Kyoto, Edo, & Osaka: Izumoji Bunjiro et al., Preface of Vols. I-III: 1833; Vols. IV-VI: 1841. First editions and a rare complete set of the Sanpo tenzan tebikigusa (1833-41), "a treatise on tenzan algebra. Some of the fan problems in this work are of considerable interest."-Smith & Mikami, A History of Japanese Mathematics, pp. 245-46. The first three volumes were published in 1833, and the remaining three volumes, written by Omura, appeared in 1841. Yamamoto (1811-?), a late Edo mathematician, studied under Hasegawa and served the bakufu as an astronomer to the shogun. Hodo Akita (real name: Gigi [or Giichi] Tsuda, active 1835-37), was a bureaucrat at the mint (Bakufu Ginza) in Edo and also a disciple and assistant to Hiroshi Hasegawa (1782-1838), a leading member of the Seki school of Japanese mathematics (wasan). Hasegawa made a series of notable contributions to geometry and practical mathematics. Omura (1824-91), was a mathematician and disciple of Akita. Very good set. The collation of our set agrees with other copies in the NIJL. Several of the volumes have light dampstaining. (Inventory #: 7660)
$1,250.00 add to cart or Buy Direct from
Jonathan A. Hill, Bookseller
Share this item
Jonathan A. Hill, Bookseller, Inc.
Offered by