A Treatise on a Section of the Strata, from Newcastle-upon-Tyne, to the Mountain of Cross Fell, in Cumberland; with Remarks on Mineral Veins in General. Also, Tables of the Strata, in Yorkshire, Derbyshire, &c. To which is added, A Treatise on the Discovery, the Opening, and the Working of Lead Mines; with the Dressing and Smelting of Lead Ores 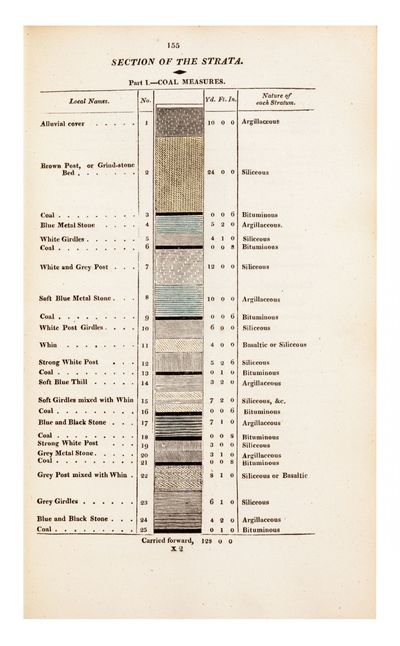 by FORSTER, Westgarth
One large folding printed table, 11 engraved plates (of which 10 are folding & 4 are hand-colored), & numerous hand-tinted diagrams in the text. 8, ix-xii, x, [11]-422, xvi, [18] pp. Thickish 8vo, cont. russia (quite well rebacked), sides decorated in gilt. Alston, Cumberland: Printed, for the Author, at the Geological Press, and Sold by John Pattinson, 1821. "Second edition, greatly enlarged" (1st ed.: 1809). This is a handsome large-paper copy; the numerous text diagrams have been hand-tinted (in regular paper copies they are left plain). Forster (1772-1835), was a mining surveyor who had extensive experience in the lead mines of the region. "Forster's book...is notable for a very long column, some 5 1/2 feet long altogether, which is shown in portions...It is a typical column of 'vertical section', in the Geological Survey's meaning of the term, showing by lines and dots the various kinds of rock, and drawn to scale. On one side are written the 'local names' (which include such curiosities as 'girdles', 'post', 'thill', 'hazle', 'plate', 'tuft') and on the other the 'nature of each stratum' (more ordinary adjectives, such as 'argillaceous', 'siliceous', 'bituminous')."-Challinor, History of British Geology, p. 93. Nice copy. â§ Hoover 318-(calling for 12 plates in error). Porter, The Making of Geology, p. 179-"Westgarth Forster attempted to depict the geological structure of the same area pictorially, by constructing a gigantic notional vertical column of the strata from Cross Fell to the North Sea, encompassing the lead mining area and the north-eastern coalfield. The section was to scale, used consistent shading, and was accompanied by a physical map and an elaborate verbal key.". (Inventory #: 7664)
$2,500.00 add to cart or Buy Direct from
Jonathan A. Hill, Bookseller
Share this item
Jonathan A. Hill, Bookseller, Inc.
Offered by