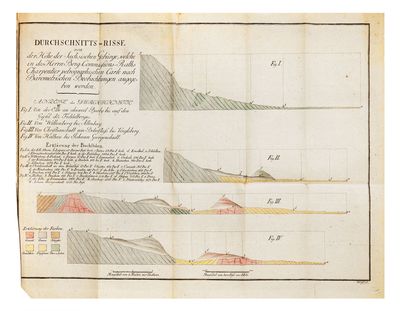 by GERHARD, Carl Abraham
Engraved vignette on first title & 10 folding engraved plates (7 of which are hand-colored). xxxx, 302 pp.; viii, 424 pp. Two vols. 8vo, orig. blue semi-stiff wrappers (ends of spines a bit frayed), uncut. Berlin: C.F. Himburg, 1781-82. First edition of a scarce work in which Gerhard "held that veins were open fissures which originated through great movements in the earth's crust as well as from other causes, and that they were filled by the action of waters dissolving material out of the surrounding country rock and depositing it in these fissures."-Adams, The Birth and Development of the Geological Sciences, p. 315. Vol. I is concerned with the origins and properties of minerals, the variations in the earth's structure, techniques to locate mineral veins, etc. Vol. II provides a detailed elaboration of the author's mineral system based on the earlier systems of Bergman, Born, Werner, Wallerius, and Cronstedt. Gerhard (1738-1821), rose to privy councillor for finance, war, and crown lands in Prussia. He later became commissary for the administration of mines and smelting works and, in 1779, was appointed councillor for mining. Gerhard's chief writings are in mineralogy, but he also wrote on geology, medicine, botany, natural history, and chemistry, and was elected to membership in many scientific societies. Nice set in original state. â§ Poggendorff, I, 880-81. Schuh, Mineralogy & Crystallography: A Biobibliography, 1469 to 1920, 1861. (Inventory #: 7665)
$3,000.00 add to cart or Buy Direct from
Jonathan A. Hill, Bookseller
Share this item
Jonathan A. Hill, Bookseller, Inc.
Offered by