[Unused Stock Certificate for Land in the City and Port of Trespalacios, Texas] 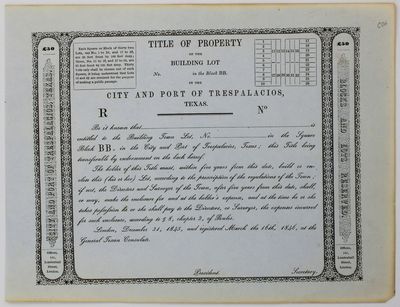 by [Texas]. [Land]
London, 1845. Very good.. Small broadside, 8 x 10.5 inches. Minor discoloration and wear at edges. Scarce stock certificate that conferred title to land in the small Gulf Coast town of Trespalacios, Texas, offered for sale to Londoners at the very end of Texas' period as an independent republic. The certificate granted the holder a small lot, 2500 square feet (25 x 100 feet), from a block of thirty-two and enjoined him or her to improve the block within five years of its purchase. The land seems to have been offered directly by the town itself through a land office maintained on Leadenhall Street in the City of London, with its interests registered with and approved by the "General Texan Consulate," that is, the Texas Legation that was located above a liquor store in St. James's. The dates on this broadside are interesting, as it seems to place its printing between the annexation of Texas by the United States in December 1845 and the official transfer of power in February 1846. The town, also known as Tidehaven, located inland from Tres Palacios Bay and southwest of Bay City, subsisted through low-level industry, agriculture, and shipping during the late-19th century, but fell out of existence in the midst of the Great Depression. We locate copies at Yale, SMU, and the University of Houston. (Inventory #: 2095)
$675.00 add to cart or Buy Direct from
McBride Rare Books
Share this item