THE MEMOIRS OF LIEUT. HENRY TIMBERLAKE, (WHO ACCOMPANIED THE THREE CHEROKEE INDIANS TO ENGLAND IN THE YEAR 1762)... 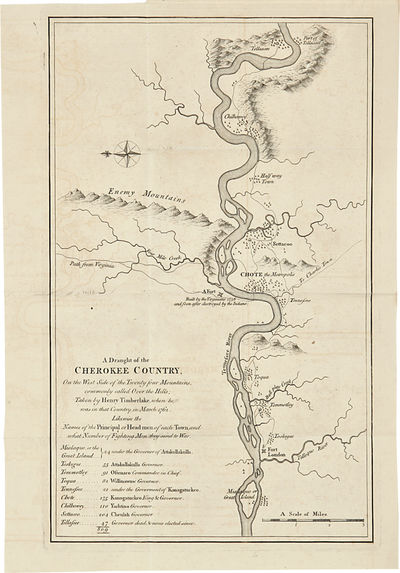 by Timberlake, Henry
London: Printed for the Author, 1765. viii,160pp. plus folding map and folding plate. Half title. Modern half calf and marbled boards, gilt leather label, raised bands. Light shelf wear. Light soiling to half title, a few ink smudges on final page, else a near fine copy. Timberlake was a British officer who spent considerable time with the Cherokees in Georgia and eastern Tennessee in the early 1760s, during the turbulent period of frontier strife at the end of the French and Indian War. He later accompanied a delegation of Cherokees to London. His account, here in the first edition, is one of the best of the period, and one of the few accounts of the war with the Cherokees in the southern colonies. The map is an important cartographic work in its own right. The folding plate is "A Curious secret Journal taken by the Indians out of the Pocket of a French Officer they had kill'd." "May very well be considered the Number One book in any Tennessee library, since it is the first book ever written concerning activities in the area now embraced in this state" - Horn. "Represents the earliest and one of the historically significant works relative to the Cherokee Indians and their activities...ranks as a most desirable rare Tennessee book" - Allen.

Columbia, Mo. : University of Missouri Press , 1985
(click for more details about VIEWS AND VIEWMAKERS OF URBAN AMERICA LITHOGRAPHS OF TOWNS AND CITIES IN THE UNITED STATES AND CANADA, NOTES ON THE ARTISTS AND PUBLISHERS, AND A UNION CATALOG OF THEIR WORK, 1825 - 1925)

[N.p., but likely Virginia 1865
(click for more details about THE 24th CORPS [manuscript title])
View all from this seller>