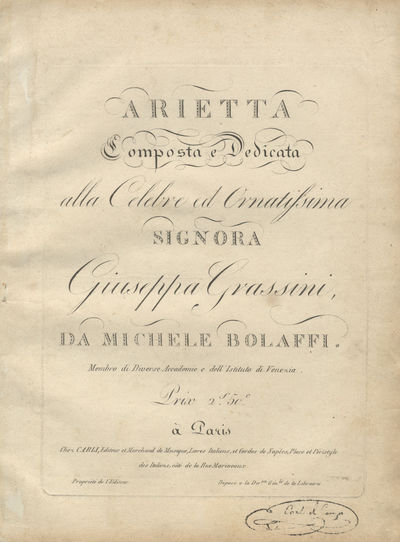 Spine reinforced with tissue, slightly cockled. Bookseller's handstamp to upper ("Carli et Comp") and to lower margins of some inner leaves ("Dept de la Seine"); slight offsetting; minor browning to edges. "Michele Bolaffi was a distinguished musician and composer active in Livorno in the early 19th century. His tenure as musical director of the Great Synagogue of Livorno can be considered a turning point in the development of choral and instrumental music for use in the Italian synagogue. Bolaffi held international prestige: he served as the musical director to the Duke of Cambridge; toured in Germany with singer Angelica Catalani; and was in the service if Louis XVIII as a church musician in France. Many of his synagogue compositions are preserved in two related manuscripts, dated 1821 and 1826, copied by the tenor Aron Croccolo, a hazzan of the Livornese synagogue. Bolafi also composed secular music, including an opera Saul, a Misere for three voices and orchestra (1802), a sonetto on the death of Haydn (1809) and many other short vocal pieces." from the composer's biography on the Jewish Music Research Center website

Giuseppina Grassini was one of the most celebrated contraltos of the early 19th century. "She made her début in 1789 at Parma in P.A. Guglielmi's La pastorella nobile. In the following year she appeared at La Scala in three comic roles but, realizing that her natural talent was dramatic, during the next decade she sang in Vicenza, Venice, Milan, Naples and Ferrara, creating roles in Zingarelli's Artaserse and Giulietta e Romeo and in Cimarosa's Gli Orazi ed i Curiazi. ...She retired to Milan in 1823 and supervised the musical studies of her nieces Giuditta and Giulia Grisi. Her voice, though narrow in range, was of great power and volume, unusually flexible for its weight and always used with taste and musicality." Elizabeth Forbes in Grove Music Online. (Inventory #: 36088)
$83.00 add to cart or Buy Direct from
J. & J. Lubrano Music Antiquarians
Share this item