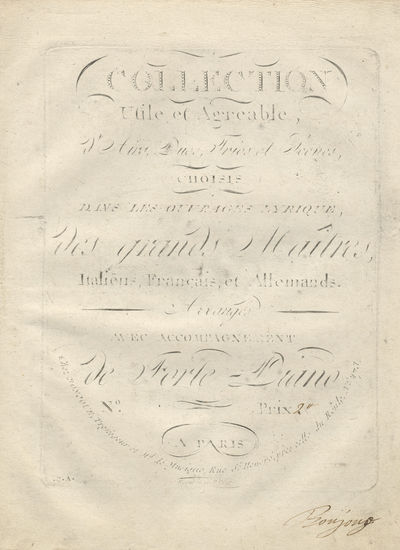 Signed by the publisher at lower outer corner of series title.

Light impression to title. Not located in RISM.

"[Mengozzi's] London début was in February 1787 as a tenor in the Haymarket company, to which his wife, the soprano Anna Benini, also belonged. The Mengozzis went to Versailles during the summer of 1787 with other singers from the Haymarket for performances of Italian opera buffa; they then settled in Paris, and in 1789 joined the company of the Théâtre de Monsieur, where Mengozzi became famous both as a singer and as the composer of many substitute arias. His L'isola disabitata is a landmark in the history of opera in France, being the first serious opera performed in Italian in Paris since Cavalli's Ercole amante. The most successful of his French operas seem to have been Isabelle de Salisburi and Selico, principally because of their spectacular element. Under the Directory Mengozzi spent some time in Bordeaux, and then returned to Paris to teach singing at the Conservatoire; he took an active part in the writing of the Méthode de chant du Conservatoire de Musique (1804) in collaboration with Garat, Cherubini and Langlé." Michel Noiray in Grove Music Online. (Inventory #: 36023)
$72.00 add to cart or Buy Direct from
J. & J. Lubrano Music Antiquarians
Share this item