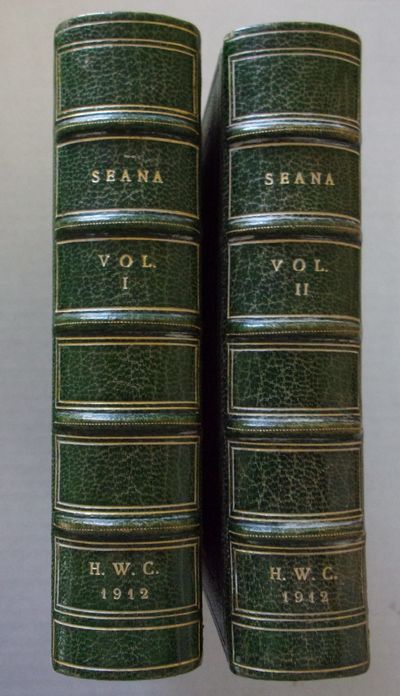 by (STEVENS, Dr. E. and CHARLES)
(AUTOMOBILE TRAVEL - PHOTOGRAPH ALBUM) (STEVENS, Dr. E. and CHARLES). SEANA. STUBBINS AND THE COLONEL ON TOUR. Two volumes. (London: Sinclair, Haymarket, 1912). Oblong 8vo. Contemporary crushed full green morocco (123 x 185mm). Two calligraphic titles, 128 platinum prints including 8 with the motor car, Although the two volumes of photographs have no obvious identifications we have been able to identify the ownership. The motor car in 1912 was registered with number BP1945 to Charles Stevens c/o Dr. E. Stevens of Sarcelles, Horsham in West Sussex on the 4th of July 1912. The car was a grey 35 cwt Delaunay-Belleville, considered the Rolls Royce of the French motor car industry before the First World War. Clearly our intrepid travelers were intent on putting the new car through its paces as the journey apparently taken towards the end of summer of 1912 covered by our estimate a total distance not less than 3,000 miles. The photographs include a couple of breakdowns in the wilds of Europe. The tour begins with the loading of the car at Portsmouth and thence by ferry presumably Le Harve, then on through Normandy, Alencon, Le Mans, Tours, Bordeaux and then on down to Biarritz. The tour continues across the border into Spain visiting San Sebastian, then east across the Pyrenees to Pau, Lourdes, Toulouse, Narbonne and onto the south coastal regions of the Gulf du Lion and the Cote d'Azur. The tour continued north-east to Switzerland crossing the Alps and onto Salzburg and Linz. At this point the tour had reached it's eastern extremity and continued west to follow the Danube route crossing overland to the river Necker, Heidelberg before the last leg traveling north-west on to Holland where the travelers took time to see Amsterdam, Haarlem, Scheveningen? The journey ends with the car being loaded on the boat back to England from Rotterdam. The photographs were processed by James A. Sinclair & Co., Ltd, founded in 1903 at 34 Haymarket in London who specialized in all the latest developments of photography including Lumiere Autocromes, cameras, fast speed shutters, together with a large department for developing, printing and enlargement. The Platinum Process used in these albums was at the height of popularity between 1910 and 1914. The process gave very good permanent print. (Inventory #: 39990)
$4,750.00 add to cart Available from Bookpress
Share this item