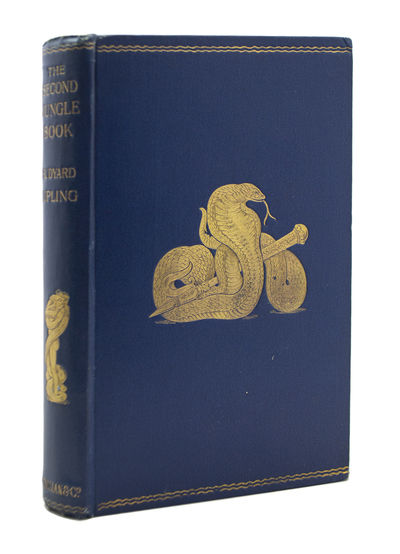 by KIPLING, Rudyard
First Edition ìSecond Jungle Bookî in the Original Binding KIPLING, Rudyard. The Second Jungle Book. With illustrations by J. Lockwood Kipling. London: Macmillan and Co., 1895. First edition. Small octavo. ( 7 1/4 x 4 3/4 inches; 181 x 120 mm). [vi], 238, [2, ads] pp. Numerous illustrations, including many full-page illustrations, included in pagination. Title-page with vignette illustrations. With two pages of publisher's advertisements. Original bright blue cloth decoratively stamped in gilt on front covers and spine and lettered in gilt on spine. With a cobra in gilt on front cover and a man and snake in gilt on the spine. All edges gilt. Original dark blue-green coated endpapers. Extremities of the spine and corners with a bit of rubbing. Final ad leaf with some light foxing. Overall about fine . Rudyard Kipling has been called "perhaps the most original genius among English-writing novelists of the latter 19th and early 20th centuries." Certainly no other has been so widely acclaimed, so eagerly read, so lastingly loved by readers on both sides of the Atlantic. The honors bestowed upon him all over the world were capped in 1907 when he was awarded the Nobel Prize for Literature. Livingston 116. Martindell and 63. Stewart and 132. HBS 68507. $750 (Inventory #: 68507)
$750.00 add to cart Available from
Heritage Book Shop
Share this item