Waverly Novels. [Waverley: or ‘Tis Sixty Years Since, Guy Mannering, The Antiquary, Rob Roy, Ivanhoe, Kenilworth, The Pirate, The Fortunes of Nigel, Peveril of the Peak, Quentin Durward, St. Ronan’s Well, Redgauntlet, The Betrothed, Talisman, Woodstock, or, the Cavalier, Chronicles of the Canongate, The Fair Maid Of Perth, Anne of Geierstein. 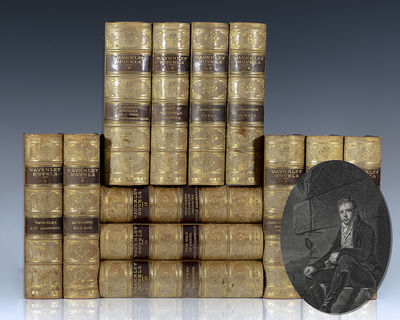 by Scott, Sir Walter
Edinburgh: Adam & Charles Black, 1883. The Centenary Edition of Sir Walter Scott's Waverly Novels. Octavo, 12 volumes bound in three quarter morocco over marbled boards by Robertson with burgundy morocco spine labels lettered in gilt, elaborate gilt tooling to the spine in six compartments within raised gilt bands, marbled endpapers, all edges marbled. Illustrated title page and tissue-guarded frontispiece to each volume, in-text illustrations. In very good condition. A lengthy series of novels by Sir Walter Scott, The Waverley Novels were among the most popular and widely read novels in Europe for nearly a century. Because Scott did not publicly acknowledge authorship until 1827, the series takes its name from Waverley, the first novel of the series released in 1814. The later books bore the words "by the author of Waverley" on their title pages. "Scott's influence as a novelist was incalculable; he established the form of the historical novel, and the form of the short story" (Drabble, 879). (Inventory #: 126344)
$600.00 add to cart or Buy Direct from
Raptis Rare Books
Share this item