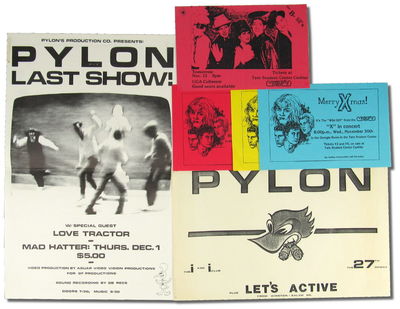 by {Athens, Georgia Music]
Athens: Various, 1983. 13 separate items. Most have folding, handling wear or staple holes, and minor loss. A small but fairly selection covering mostly Fall, 1983 in Athens. At the time R.E.M. was ascendent having just released 'Murmur' to critical acclaim, the B52's were on their third record, but Pylon was calling it quits. Always a hotbed of new music, in just a few years the town would be internationally known because of R.E.M.'s rising popularity not just on college radio, but in mainstream music.


Bands represented as follows: X: Three different versions of handbill for same show on different color stock. The B-52's: single handbill on red stock; Pylon: Two posters, one for their last show; Kilkenny Cats: two different flyers for the same show at the 40 Watt; Earth Day scheduled for two days after the accident that killed the bass player, drummer and Deacon Lunchbox; Art in the Dark: two flyers; The Psychedelic Furs: one flyer.
Provenance: Retrieved after after shows by a single individual and purchased directly from him. (Inventory #: 49092)
$250.00 add to cart or Buy Direct from Kenneth Mallory );
More from this seller