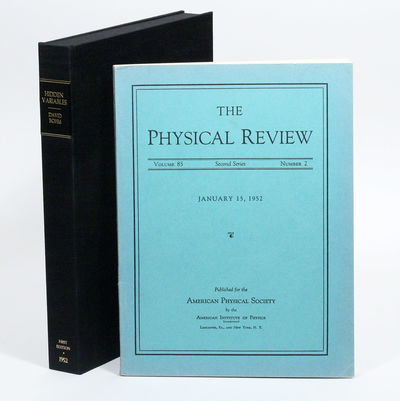 by BOHM, DAVID
Lancaster, PA: The Physical Review, 1952. First edition. Original wrappers, custom box. Fine. ONE OF THE MOST INFLUENTIAL APPROACHES TO QUANTUM THEORY: FIRST EDITION OF DAVID BOHM'S 'HIDDEN VARIABLES" INTERPRETATION. "Bohm's primary contribution to Quantum Theory lies in his attempt to construct an ordinary reality interpretation in terms of 'hidden variables.' Bohm considered this interpretation of Quantum Theory to be a significant advance in the development of the theory, one that might appease the many critics who, having aligned themselves with Einstein, still maintained that Quantum Theory is incomplete. This claim as to the possible existence of 'hidden variables' would serve as a springboard for future analysis and experimentation by people like Bell and Aspect, who would be instrumental in finally closing the book on the completeness debate" (Dolling et al., The Tests of Time).