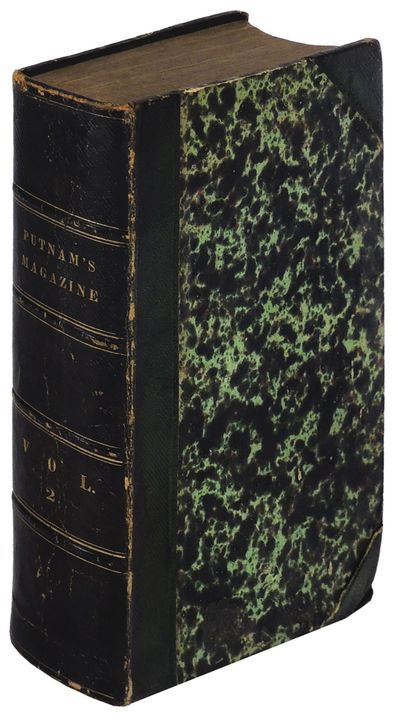 by Melville, Herman
New York: G.P. Putnam & Co, 1853. Hardcover. Very Good. Hardcover. "Bartleby the Scrivener," Herman Melville's famed short story, was first serialized anonymously in two parts in the November and December 1853 issues of Putnam's Monthly Magazine. It was reprinted with minor textual changes in Piazza Tales in 1856. The story has been called the unquestionable masterpiece of Melville's short fiction and is among the most noted American short stories. Volume II included July - December 1853. The story appeared on pages 546-557 in November and pages 609-615 in December. Bound in three quarter dark green leather over marbled paper covered boards. Bumping to lower corners, rubbing to hinges, minor cracking to spine leather, and minor loss to marbled paper on front board. Marbled endpapers. Bookplate of James V.C. Perry from Sandwich, Ontario to front pastedown. Occasional spots of foxing throughout (heaviest on endpapers) and very occasional notations in pencil. Very good condition. 690 pages. LIT/060321. (Inventory #: 35182)
$350.00 add to cart or Buy Direct from
Kelmscott Bookshop
Share this item