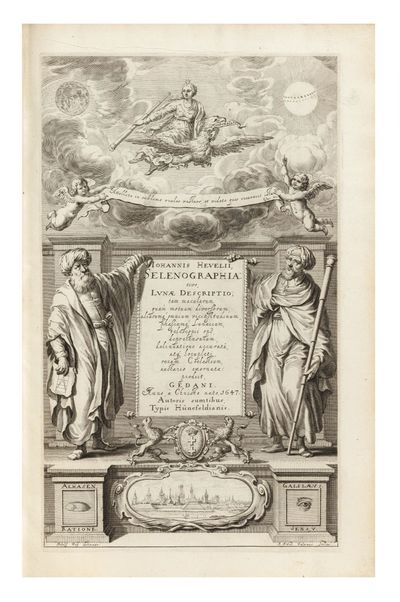 by HEVELIUS, Johannes
Fine engraved frontis., head- & tailpieces, 38 engraved plates (four of which are folding), & 71 engravings in the text. 20 p.l. (incl. frontis. & blank leaf), 913, [45] pp., one leaf of errata. Folio, fine cont. smooth vellum over boards. Danzig: Auctoris Typis, & Sumptibus, 1668. First edition and a fine copy of another of Hevelius's most important books. "After nearly 15 years, the Cometographia was published as a series of books or chapters. The first chapter presented observational data on the comet of 1652. One of the more interesting observations was the comet's expansion in size as it receded from perihelion. Later, Isaac Newton would have trouble trying to explain a similar phenomenon observed in the comet of 1680. The second and third chapters were devoted to arguments for comets existing beyond the Earth's atmosphere, and Chapters Four and Five presented a parallax determination for the comet of 1652 and a discussion of its true position and distance from the Earth. The work went on to discuss the comets of 1661, 1664, and 1665. It is interesting to note that in his discussion of the comet of 1664, Hevelius did not use his disputed observation of February 18, 1665. The book ended with a catalog of 251 cometary apparitions from the Biblical deluge to 1665... "Embedded in Cometographia was Hevelius' theory of comets, an interesting collection of ideas based primarily on those of Kepler. Like Kepler, Hevelius began with the premise that comets were transitory objects, and hence their basic motions were rectilinear."-Yeomans, Comets, pp. 84-85. The fine engraved frontispiece is "doubly interesting: it depicts Hevelius sitting at a table with a cometary orbit shown as a conic section combined with a spiral, the sun at the focus of the former. By contrast, a figure of Aristotle holds an illustration of some linear and sublunary cometary paths. Below [actually, behind] is a valuable illustration of Hevelius' house and observation platform."-D.S.B., VI, p. 362. Provenance: Inscription of "Cat. V1 P331 CS Sledmere" on front paste-down endpaper. This copy comes from the library formed by Sir Christopher Sykes (1749-1801), at Sledmere House in Yorkshire. Fine copy. Preserved in a morocco-backed box. â§ Johannes Hevelius (B.Y.U., 1971), 10-"One of the major works of Hevelius.". (Inventory #: 7680)
$125,000.00 add to cart or Buy Direct from
Jonathan A. Hill, Bookseller
Share this item
Jonathan A. Hill, Bookseller, Inc.
Offered by