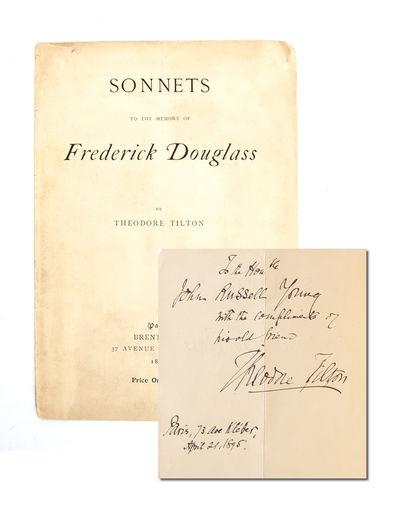 by Tilton, Theodore
Paris: Brentano's, 1895. First edition. Original printed wrappers stitched at spine. Central vertical fold to both wraps, with some splitting near foot of front; some chipping along outer edges, and splitting along lower third of spine but wraps holding well. Complete in 12 pages and measuring 190 x 130mm. Inscribed on the verso of the front wrapper in the year of publication and presented to the journalist, diplomat, and seventh Librarian of the United States Congress: "To the Honorable John Russell Young with the compliments of his old friend Theodore Tilton. Paris 73 Ave Kleber, April 21, 1895." Scarce institutionally and in trade; of the three copies that have sold at auction in the past 112 years, only one other has been signed (1909, Anderson Galleries).

An ardent abolitionist, Theodore Tilton used his platforms as a newspaper editor and well-known poet to promote equality causes in the U.S. and abroad. Among the many close relationships he formed in the course of his work was a bond with Black leader Frederick Douglass. Speaking of their alliance, Douglass wrote in his autobiography of meeting Tilton for the first time in 1866, at the Southern Loyalist Convention in Philadelphia: "There was one man present who was brave enough to meet the duty of the hour; one who was neither afraid nor ashamed to meet me as a man and a brother...the man was Mr. Theodore Tilton. He came to me by the hand in a most brotherly way and proposed to walk with me into the procession." Douglass' death in 1895 sent the movement and the nation into mourning; and in the present work, Tilton, in exile in France, creates a poetic tribute to the heroic life and "A Career Unique" lived by Douglass. While Tilton opens with a timeline of Douglass' greatest political contributions, the sonnets that follow remind us of the complexity and humanness of the man, and help us feel that the loss is all the greater. "I knew the noblest giants of my day, And he was of them -- strong amid the strong; But gentle too: for though he suffered wrong, Yet the wrong-doer never heard him say 'Thee also do I hate...'" Much as Douglass described Tilton in familial terms, so too does Tilton express his loss. "I loved him long; As dearly as a younger brother may. (Inventory #: 4357)
$3,250.00 add to cart or Buy Direct from
Whitmore Rare Books
Share this item