[Scrapbook of a department store buyer. ] 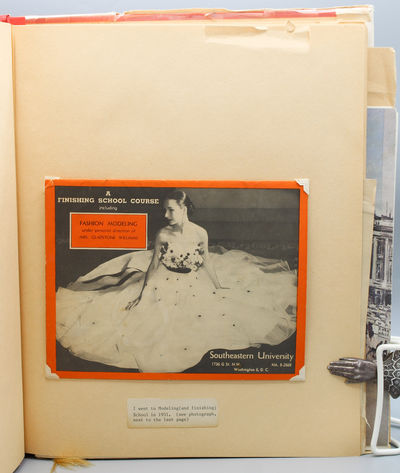 by [ Fashion ]. Jackson, Caroline Frazier
[ New York: [1948-1974] Original red binder with part of a silver Bergdorf Goodman box pasted onto front cover and a floral Lord and Taylor wrapper pasted to back cover. 12 in. x 14 in. . With eighteen ephemeral items and seven photographs (laid in and pasted down) interspersed with a detailed typewritten report chronicling the work history of Caroline F. Jackson from 1948 to 1974. Stick-on labels identify dates and describe each item. The items include an order form for clothing for Zsa Zsa Gábor; a lengthy program for the 1971 April in Paris Ball, illustrated with color photo reproductions; a conference program featuring Betty Friedan as keynote speaker, and original color photographs of a boutique opening in San Juan, Puerto Rico. Some chipping to edges of leaves and a bit of toning to some items. One leaf loose, laid in at original position. A very good, unique collection of items detailing a department store buyer's glamorous and jet-setting career. Caroline Frazier Jackson (b. 1935) compiled this scrapbook as a resume for her Fashion Merchandising Practicum (ca. 1974). The first point in her career timeline is when, at the age of thirteen, she decided to pursue fashion merchandising. She began her fashion career wrapping packages at a Maryland department store at the age of fifteen, as she recounts in her career timeline. She secured her first sales job at a Woodward and Lothrop in 1953, after which she studied at the University of Arizona, the University of Maryland, and the Fashion Institute of Technology. Jackson went on to work as a buyer at Lord and Taylor in New York and then at Bergdorf Goodman in their Givenchy boutique and the casual and swimwear departments. At the latter business, she began traveling to Europe on sales trips: Jackson writes that her first trip, during which she stayed at the Ritz in Paris, was "like a movie." Her employment at the Givenchy boutique of Bergdorf Goodman brought her to Paris again, where she dressed models for fashion shows and worked with both Hubert de Givenchy and his brother Jean-Claude. (Inventory #: 17037)
$375.00 add to cart or Buy Direct from
Michael R. Thompson Rare Books
Share this item
Michael R. Thompson Rare Books
Offered by

London: : Smith, Elder and Co., , 1862
(click for more details about Intellectual Education, and Its Influence on the Character and Happiness of Women)

Oakland, California: April 1938
(click for more details about A New Experience [Manuscript fiction])
View all from this seller>