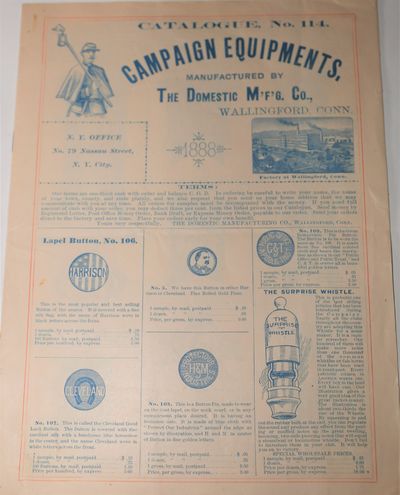 NA
NA. Very Good. Very unusual trade catalogue, selling Presidential campaign paraphernalia -- banners, buttons, uniforms, hats, helmets, torches, capes, etc. etc., for the Cleveland Harrison race of 1888. From back when Presidential campaigns served up a high quotient of razzle dazzle spectacle. Scarce. We could find no other copies of this particular catalogue, or others from this company, but more interestingly, we have never before come across a trade catalogue from the Gilded Age that is specifically about marketing wares for a Presidential race! In this particular election, Benjamin Harrison won the electoral college, and thus the Presidency, against incumbent Cleveland, despite losing the popular vote. Cleveland later won a second term in 1892. 4to. 29.5 ny 20 cm. 16 pp., including cover. Moderate wear. (Inventory #: 006895)
$750.00 add to cart Available from
White Fox Rare Books & Antiques
Share this item
White Fox Rare Books and Antiques
Offered by