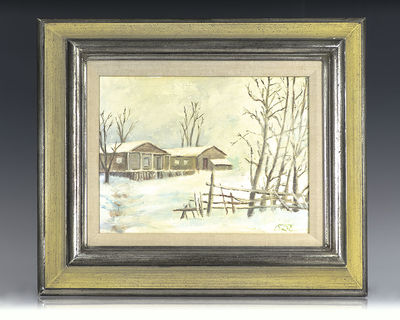 signed first edition
by Eisenhower, Dwight D
Rare Dwight D. Eisenhower oil painting of Eisenhower's country retreat, Camp David, in the snow. Oil on canvas. Signed and inscribed by the President in the lower right corner of the painting to his wife Mamie Geneva Eisenhower (nee Doud), "DDE For M.D.E. D.D.Eisenhower Copy of a Kontny." Eisenhower here refers to Polish (later American) landscape painter Pawel Kontoy, a contemporary of his who sketched and painted various stark and snowy landscapes and cityscapes before, during, and after his travels as a soldier throughout WWII. Eisenhower was an amateur painter, and was known to sketch and doodle in meetings during his White House years. He kept a studio on the second floor of the White House, and despite his busy schedule, painted as a pastime and means of relaxation. In 1990, the Richard Nixon Library hosted an exhibition of his work including an oil-on-canvas portrait of his wife, Mamie, as well as many landscapes and self-portraits. Located in the wooded hills of Catoctin Mountain Park, in Frederick County, Maryland, Camp David served as Eisenhower's country retreat throughout his presidency. Originally known as Hi-Catoctin, Camp David was built as a camp for federal government agents and their families by the Works Progress Administration. In 1942, President Franklin D. Roosevelt converted it to a presidential retreat and renamed it "Shangri-La", for the fictional Himalayan paradise in the 1933 novel Lost Horizon by British author James Hilton. Camp David received its present name in 1953 from Dwight D. Eisenhower, in honor of his father, and grandson, both named David. In fine condition. Rare and desirable. Dwight Eisenhower served as the 34th President of the United States from 1953 until 1961. He was a five-star general in the United States Army during World War II and served as Supreme Commander of the Allied Expeditionary Forces in Europe. He was responsible for planning and supervising the invasion of North Africa in Operation Torch in 1942-43 and the successful invasion of France and Germany in 1944-45 from the Western Front. In 1951, he became the first Supreme Commander of NATO. (Inventory #: 126788)
$40,000.00 add to cart or Buy Direct from
Raptis Rare Books
Share this item