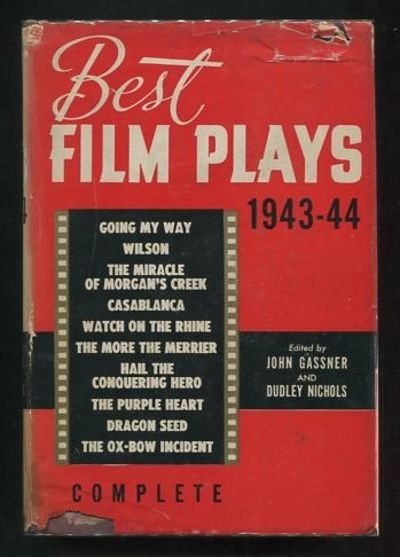 by Gassner, John, and Dudley Nichols, eds.
New York: Crown Publishers. Very Good in Fair dj. (c.1945). First Edition. Hardcover. [good sound copy, with light shelfwear and some minor external dampstaining at the base of the spine, and a small bit of paper from the jacket interior still affixed to the lower front cover, where the jacket had once been stuck; the jacket has a shallow one-inch-wide chip at the bottom left of the front panel (where it had gotten adhered to the book), with some internal staining in that area as well; the jacket spine is severely faded and somewhat wrinkled, and there's quite a bit of generalized wear and tear, including several small tears along the top edge; now encased in a new mylar sleeve, the jacket is moderately presentable but no more than that]. (B&W photographs) INSCRIBED briefly and SIGNED by the co-editor on the front endpaper: "Compliments of / John Gassner." Contains the ten screenplays deemed the best of the season; this was intended to become an ongoing series a la "Best Plays," but was published only this year and one more. The screenplays (and writers) included herein are " Wilson" (Lamar Trotti); "The Purple Heart" (Jerome Cady); "Going My Way" (Frank Butler and Frank Cavett; based on a story by Leo McCarey); "The Miracle of Morgan's Creek" (Preston Sturges); "Watch on the Rhine" (Dashiell Hammett; based on the stage play by Lillian Hellman); "Dragon Seed" (Marguerite Roberts and Jane Murfin; based on the novel by Pearl S. Buck); "The More the Merrier" (Robert Russel, Frank Ross, Richard Flournoy and Lewis Foster); "The Ox-Bow Incident" (Lamar Trotti; based on the novel by Walter Van Tilburg Clark); "Hail the Conquering Hero" (Preston Sturges);and last but certainly not least, "Casablanca" (Julius J. & Philip G. Epstein and Howard Koch; based on a play by Murray Burnett and Joan Alison). The volume also includes essays by Walter Wanger ("The Motion Picture Industry and the War Effort") and Darryl F. Zanuck ("Preface to Wilson"). Although not marked as such, this copy was from the collection of longtime New York Times film critic Bosley Crowther. ****NOTE that additional postage will be requested for international shipping of this moderately heavy book; if this concerns you, please contact us for a shipping quote before placing your order.**** Signed by Editor . (Inventory #: 26941)
$100.00 add to cart Available from ReadInk
Share this item
ReadInk
Offered by