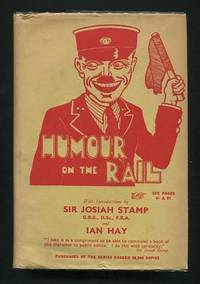 by Aye, John
London: The Universal Press. Very Good+ in Very Good+ dj. 1931. First Edition. Hardcover. [good sound copy with only minor shelfwear, would grade bit higher but for age-toning to the pages (they are not, however, brittle -- merely brown); the jacket has tiny tears at the spine extremities and some very shallow paper loss at the top of the spine, with very light soiling and just a touch of age-toning to the spine panel, all in all very well preserved]. (The Ideal Library) Series A collection of humorous anecdota derived from "personal observations and first-hand experiences" on the British rail system, divided topically, e.g.: "Porters"; "Queer Passengers"; "Slow Trains"; "Accidents"; "Strange Uses of Carriages"; "The Underground"; "Railway Nomenclature"; etc. The Preface is by the popular humorist, novelist and playwright Ian Hay, and the Introduction is by Sir Josiah Stamp, who among his other distinguished achievements was then the Chairman and President of the London, Midland & Scottish Railway, who opines that "it is not often that a railway executive is asked to comment or pass judgment upon wit and humour, [since] the times are so grim and his task so dour that he is not expected to have any mind for such things." Sir Josiah (later to be raised to the peerage as the 1st Baron Stamp), however, proved equal to the task, tossing out a few of his own favorite anecdotes while at the same time harrumphing that "the higher railway executive has very little opportunity for promoting the same kind of humour as the porter or the guard." I must note here that I find the expression on the face of the guard depicted in the jacket illustration to be a bit, shall we say, maniacal. . (Inventory #: 26944)
$50.00 add to cart Available from ReadInk
Share this item
ReadInk
Offered by