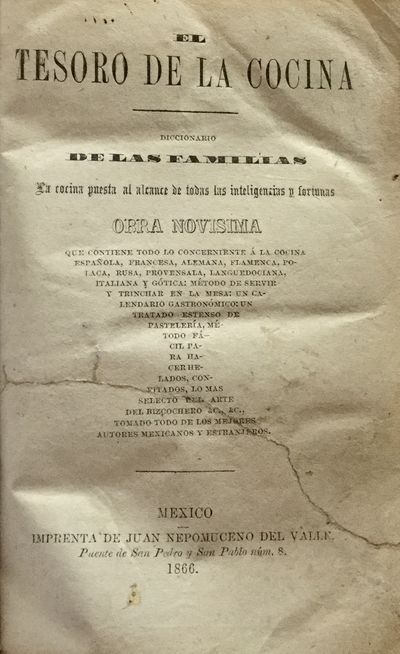 First edition. Not in standard sources, but mentioned in Janet Long, Conquista y Comida: Consequencias del encuentro de dos mundos (Mexico: UNAM, 2003, p. 473). This anonymously written dictionary-cookbook is divided into four sections: recipes; setting the table (illustrated by some of the lithographs); a gastronomical calendar indicating which vegetables and spices are in season; and the art of carving at the table (also illustrated by some of the lithographs). As the title indicates, many of the recipes are of foreign origin (e.g. "Peras á la alemana" and "Peras de Inglaterra confitadas"), although many of the ones given are native Mexican dishes using traditional ingredients. In some instances, the recipes for particular animals are extensive. For example, one finds eighteen different recipes, including a large sample of foreign dishes, for partridges. Drink and cake recipes are also extensive, including some borrowed from foreign cultures. Included, for example, is "Ponche inglés," about which it is observed: "Esta bebida inglesa se ha propagado ya demasiado entre nosotros. Se la reputa capaz de restaurar las fuerzas del individuo, y se mira como un escelente dijestivo, pero su abuso es peligroso" (p. 388). (The modern reader will recognize this drink as rum punch, here made with lemonade.) That recipe is supplemented by several more for native pulque and for a concoction called "Punche de muertos" (p. 395). Getting the food prepared is only half the battle, however, since it must eventually be served. The two sections on dining are replete with social customs and fashions, some of which were apparently problematic, especially for large gatherings. The first piece of advice, for example, is to clean thoroughly and be prepared well ahead of time so that problems can be corrected. The author may well have suffered a few unpleasant meals, for warnings are given against trying to seat people too close together and against using the wrong kind of lighting. (The author prefers those suspended from the ceiling rather than those that sit on the table, which cast shadows and can be knocked over.) The author also apparently underwent rude servants at some point, because their appearance and behavior are specifically commented upon. Finally, the author also seems to have witnessed problematical carving, because obvious pitfalls are warned against: the knives must be of various but correct sizes, must be sharp, and the carving preferably takes place at a side table by someone with the proper knowledge and skills ("Sus manos deben ser ájiles y bien aseguradas, sus brazos flexibles y rollizos…"). All the plates serve to illustrate various table settings and the carving process for various cuts of meat (sides of beef, pork, various fowl, and fish) (Inventory #: 92806)
$2,500.00 add to cart or Buy Direct from
Howard Karno Books
Share this item
Howard Karno Books, Inc.
Offered by

All items are in good antiquarian condition or better, unless otherwise described. Everything is guaranteed to be as described. Anything may be returned for any reason within seven (7) days of receipt with prior notice. The item must be returned in the same condition as received. Refunds, unless our error, do not include postage or carriage. Prices are net and subject to change. Carriage and insurance are additional. California residents please add appropriate state sales tax. New customers are requested to send payment with order or supply satisfactory references. Institutional requirements accommodated. Clients must remit in US dollar funds, payable on a US bank, or transfer the amount due directly to the account of Howard Karno Books, Inc. Shipping Terms: Delivery in the U.S. will be by ground UPS or insured U.S. Postal Service and shipment abroad by U.S. air mail insured or Federal Express, unless we are otherwise instructed. Customs fees and additional taxes not included. All shipments made are insured or can be tracked unless buyer pre-pays and assumes risk. Institutional requirements can be arranged. Overnight, second or third-day delivery can readily be accommodated. Shipping costs may vary due to monthly fuel surcharge changes.
More from this seller