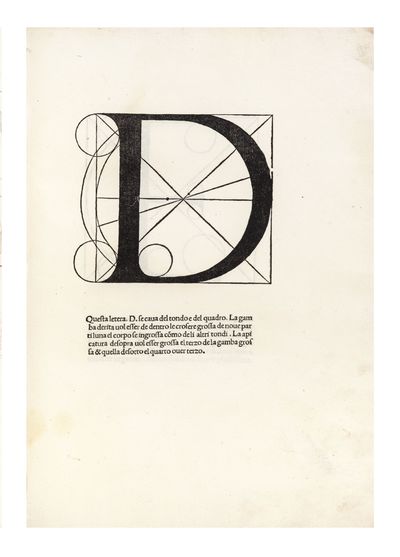 by [PACIOLI, Luca]
Edited by A. Capella. 87 fine woodcut plates & 183 woodcut diagrams in the margins. Title printed in red & black. 6 p.l., 33, [1 blank leaf], 26 leaves. Small folio (288 x 201 mm.), cont. vellum over boards (binding a little soiled, first & last leaf very slightly soiled), upper cover with the legend "Divina Propor" on a scroll in an early hand, remains of ties. [Venice]: P. de Paganini, [June 1509]. First edition and a fine, unpressed, and large copy of this great book of the Italian Renaissance, which contains the handsome woodcut illustrations from designs by Leonardo da Vinci; the importance of this book for the study of type design and Renaissance mathematics and architectural theory cannot be overestimated. The discussion of letter forms, is "the first serious treatise of this kind to be printed and became the inspiration of the successive similar works by Albrecht DÃ¼rer and by Geofroy Tory."-Stanley Morison, "Preface" to his Grolier Club edition (1933). Leonardo provided some 59 drawings of geometrical solids for Pacioli's treatise, and these designs were reproduced in the two surviving manuscripts and our printed edition. "The Divina proportione...comprised three books: 'Compendio de divina proportione,' 'Tractato de l'architectura,' and 'Libellus in tres partiales tractatus divisus quinque corporum regularium.' The first book, completed at Milan in 1497, is dedicated to Ludovico Sforza. Its subject is the golden section or divine proportion, as Pacioli called it, the ratio obtained by dividing a line in extreme and mean ratio. It contains a summary of Euclid's propositions (including those in Campanus' version) relating to the golden section, a study of the properties of regular polyhedrons, and a description of semi-regular polyhedrons obtained by truncation or stellation of regular polyhedrons. Book 2 is a treatise on architecture, based on Vitruvius, dedicated to Pacioli's pupils at Sansepolcro. To this he added a treatise on the right proportions of roman lettering. The third book is an Italian translation, dedicated to Soderini, of Piero della Francesca's De corporibus regularibus... "The writings of Pacioli have provided historians of the Renaissance with important source material for the study of Leonardo da Vinci."-D.S.B., X, pp. 270-71. Fine and fresh copy, preserved in an elegant green morocco box. This is the third time I have had the pleasure of owning this copy. I first sold it many years ago to a very discerning private collector in Paris and following his death, the book came back to me in 2011. I soon sold this copy again from my Catalogue 200 to a well-known art collector in New York City, who has now moved into other areas of book collecting. â§ Kemp, The Science of Art, pp. 27, 55, 62, 63, 104, & 171. Mortimer, II, 346. Smith, Rara Arithmetica, pp. 87-89. (Inventory #: 7698)
$475,000.00 add to cart or Buy Direct from
Jonathan A. Hill, Bookseller
Share this item
Jonathan A. Hill, Bookseller, Inc.
Offered by