Manuscript Invoice for Blank Books Bond for the Use of the Circuit Superior Court of the Law Chancery of Nicholas County, Virginia 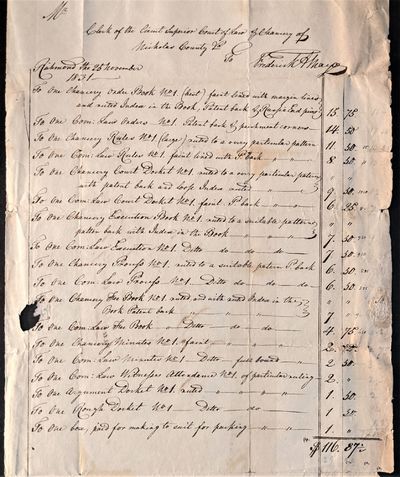 by Mayo, Frederick August
1831. Folio broadside. 340 x 210 mm., [13 ¼ x 8 ½ inches]. Text in ink. Old fold lines, neat archival repair along one vertical fold, without loss; small hole at left margin due to loss of wax seal
.
Frederick Mayo (1785-1853), was a Richmond bookbinder and stationer who was Thomas Jefferson's binder from 1818 to just before the collector's death in 1826. He was know for his full calf leather bindings, "in the style of the day, a combination of gold and blind tooling. . .Restrained in taste and style, his bindings [would have] thoroughly satisfied Mayo's most important patron. . . " Mayo was known for having used a number of binder's tickets to identify his work, a practice not often used by other binders of the period.
An 18-item invoice describing in detail Mayo's work, including ruling and binding various kinds of blank books required for keeping court records. These include: "One Chancery Order Book No. 1 (best) faint lined with margin lined and ruled Index in the Book. . ."; "One Com. Law Orders No. 1 Patent back & parchment corners. . ."; "One Chancery Court Docket No. 1 ruled to a very particular pattern . . ." [etc.].
The invoice lists Mayo's prices for the individual works, a total of $116.87 ½, with a few faint pencil notations in right margins, each a somewhat higher price that the one given in ink.
With the address on the verso to P. Burne, Esq., Merchant Lewisburg, Greenbrier County, Va., with a circular date stamp and "paid" in manuscript. Burne presumably acted as a broker between Mayo and the Court, advancing payment to Mayo, with reimbursement coming from the Court. Three lines in manuscript on the verso near the margin notes, "had to return the same, and had to [?] our accounts, or copies thereof with the certificates annexed, as the accounts are to be [?] at the auditors office, the most of the Clerks have sent the original back."
For detailed biographical information on Frederick Mayo and his work with Thomas Jefferson see, Hannah French's essay "Thomas Jefferson's Last Bookbinder: Frederick August Mayo's Life and Work" in Bookbinding in America, Worcester, AAS, 1986.
. (Inventory #: 869)
$1,800.00 add to cart Available from
De Simone Company
Share this item
De Simone Company, Booksellers
Offered by

by Photographs of Florence

1930
(click for more details about Firenze: Album di 40 Tavole)
View all from this seller>