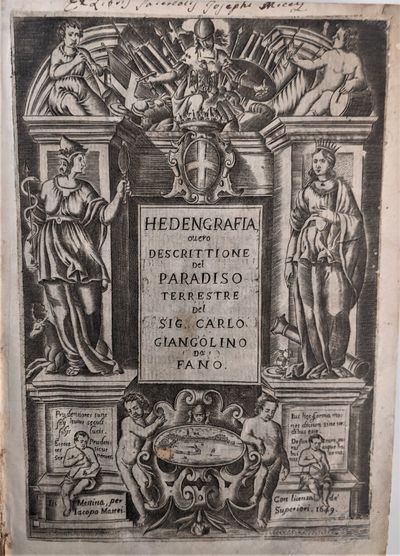 by Giangolino, Carlo da Fano
Messina: Jacopo Mattei, 1649. 4to. 275 x 195 mm., (10 ¾ x 7 ¾ inches). [26], 751, 17 pp. Illustrated with an engraved title-page, an engraved portrait of the author, an engraved map of the Middle East by the noted engraver and cartographer Placido Donia, 10 engravings of antique alphabets in the text. Bound in late 18th century vellum, red leather letter pieces on the spine. Text with signatures that are brown, some light foxing throughout the text.
Rare first edition of a very rare work describing 'Paradise' or the 'Garden of Eden', the place where human life was first created. The work is organized in three parts; first a discussion of etymology of the word "paradise" and how it was used by Christian scholars over the centuries. The second part is a detailed description of the Middle East both during ancient and modern time. He describes the travel, navigation, geography, and character of the people and for today's researcher this is the most important part of the book. It should be noted that information about the Middle East and the Muslim world in particular was in great demand I the middle of the seventeenth century as Europe struggled to maintain control of continental territories from the invasion from the East. The final part of the book is a study of scripture and the descriptions of paradise that appear there.
Giangolini (Fano 1591-Messina 1652) was an astronomer, mathematician, cartographer, geographer and literary man, who was the tutor of Philip IV of Spain (dedicatee of this work) and a confidant of Pope Urban VIII precisely in the years in which he wrote this book. Hedengrafia, is a very vast geographical text that fits into the trend, rather in vogue in the seventeenth century, of the myth of Eden and the identification and description of the earthly Paradise. This description is the longest and most detailed ever published on the subject and the author's scholarship also makes it an exceptional document on the geography of the Near East.
Placido Donia who engraved the title-page, portrait, and map of the Middle East is from a noted family of jewelers and engravers working in Messina from the late sixteenth to the early eighteenth centuries.
This title is not located in OCLC, and not cited in the online catalogues of the Library of Congress, Harvard, Princeton, Yale, the Morgan Library and not available on any of the online sales databases. NUC cites copies at Berkeley and Wisconsin.
Brunet II, 1583, "Ouvrage curieux, contenant une description historique et topographique de l'Arménia, la Mésopotamie, la Chaldée, etc.." Graesse III, 78. See Encyclopaedia metropiltana, 1855 edition, p. 116 for a description of Giangolino's book and the field of research around the subject. . (Inventory #: 871)
$12,000.00 add to cart Available from
De Simone Company
Share this item
De Simone Company, Booksellers
Offered by

by Photographs of Florence

1930
(click for more details about Firenze: Album di 40 Tavole)
View all from this seller>