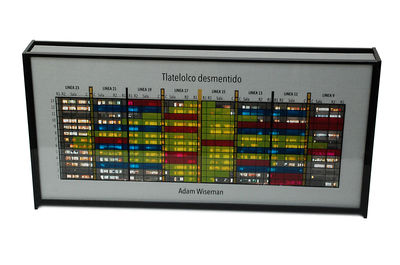 by Weisman, Adam
One box-hardcover binding container (size 23 x 51 cm), 1 tryptic with 3 color photographs, (size 20 x 50 cm ea., 24 x 150 cm. tryptic) printed (archive quality digital print) on Hahnemühle Photorag paper 100% cotton of 310 grams, signed and numbered, 10 color photographs printed (archive quality digital print) on Hahnemühle Photorag paper 100% cotton of 310 grams, (size 24 x 33 cm), signed and numbered, 1 video "Acción 27.02.14 / 20:00 horas". Timelapse (Duration: 19 sec.), 1 flipbook "Acción 27.02.14 / 20:00 horas" (78 pages; size 7 x 10 cm), Certificate of authenticity & Hologram signed by the artist, all inside acrylic box. Photographic portfolio and artistic action by Adam Wiseman (1970) developed in Tlatelolco, a residential complex located in the iconic Plaza de las Tres Culturas. Mexico City and London based photographer Adam Wiseman was born and raised in Mexico City, the son of a Scottish mother and American father. Educated at NYU and ICP in NY he returned to Mexico City in 2001, where he has been exploring ways to challenge traditional documentary processes through concept driven photography and video. His editorial project "Tlatelolco Disproved" (Tlatelolco Desmentido) is both an urban landscape and the portrait of a community, created with the collaboration of more than 100 residents of the Chihuahua building, documented with photographs and video. The residential urban complex of Tlatelolco, completed in 1964, became the second largest of its kind on the American continent (after Co-op City in the Bronx). It was part of Mexico's ambitious movement towards modernization. Architect Mario Pani, a contemporary of Le Corbusier, brought functional modernist architecture to Mexico with its urban ensemble Nonoalco Tlatelolco, a utopian middle-class paradise. His project was carefully scheduled to be completed a couple of years before Mexico hosted the Olympic Games. Pani's dream was short-lived. Only 4 years after finishing Nonoalco Tlatelolco in 1968, and 10 days before the opening ceremony of the Olympic Games, the government massacred hundreds of students during a peaceful student protest. Less than two decades later the tragedy returned to Tlatelolco when hundreds of people died when one of the buildings collapsed in the 1985 earthquake. After the earthquake, the urban complex was transformed: the skin of the buildings, large panels that gave an elegant and uniform square shape to the whole, were removed when they were discovered to be highly inflammable material, and the origin of a series of fires. Many of the buildings were shortened by 3 floors, some demolished, and in others solid concrete columns were built on their façade to make them safer and stronger. Today, Tlatelolco exhibits the scars of history. Far from Pani's vision, eroded by tragedy, it exists as a city that defines itself on its own terms. "I designed a series of abstractions on paper that refer to historical events. I translated these designs into light pixels that represent each window of the facade of the Chihuahua building. We invite the residents of the more than 90 apartments to participate in this experiment. The action was meticulously planned: each apartment received individual scripts that indicated when to turn on and off the lights throughout the apartment. The changes were given every 15 seconds for 23 minutes, which resulted in a total of 92 photographs. Without trial and little idea of why they did it, the neighbors collectively created a piece that bears a certain similarity to what was planned, but that acquired a life of its own. I was wrong to think that suspicion, fear, apathy and selfishness would limit participation, that the project would never reach a critical mass and therefore never achieve visual coherence. But more than 90% of the departments of the building participated with a spirit of community, blind faith, and without being able to see the results of their actions. Tlatelolco can not be explained, it can not be planned, and it could not be verified. Tlatelolco disproved." (HKB Translation) --FONCA webpage. CONTENTS: Presentación / Daniel Usabiaga (Inventory #: 111733)
$4,500.00 add to cart or Buy Direct from
Howard Karno Books
Share this item
Howard Karno Books, Inc.
Offered by

All items are in good antiquarian condition or better, unless otherwise described. Everything is guaranteed to be as described. Anything may be returned for any reason within seven (7) days of receipt with prior notice. The item must be returned in the same condition as received. Refunds, unless our error, do not include postage or carriage. Prices are net and subject to change. Carriage and insurance are additional. California residents please add appropriate state sales tax. New customers are requested to send payment with order or supply satisfactory references. Institutional requirements accommodated. Clients must remit in US dollar funds, payable on a US bank, or transfer the amount due directly to the account of Howard Karno Books, Inc. Shipping Terms: Delivery in the U.S. will be by ground UPS or insured U.S. Postal Service and shipment abroad by U.S. air mail insured or Federal Express, unless we are otherwise instructed. Customs fees and additional taxes not included. All shipments made are insured or can be tracked unless buyer pre-pays and assumes risk. Institutional requirements can be arranged. Overnight, second or third-day delivery can readily be accommodated. Shipping costs may vary due to monthly fuel surcharge changes.
More from this seller

Mexico, D.F. : Troconi-Letayf & Campbell , 2020
(click for more details about POP-LATINO Clothbound in a clamshell box with cover printed in silkscreen)

Mexico, D.F. : Troconi-Letayf & Campbell , 2020
(click for more details about FAHRENHEIT 451 Walnut box container showing an original book burned by the artist, protected with an acrylic cover.)
View all from this seller>