A Life Full of the Lord's Grace 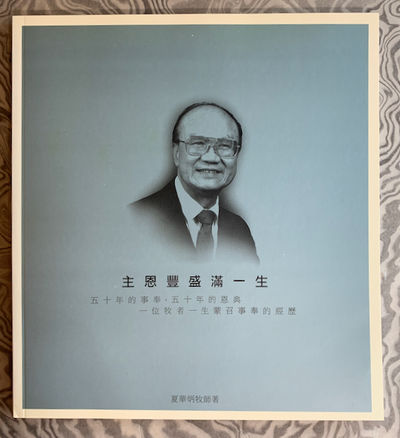 by Howard Wah Ping Ha (1921-2003)
Alameda, CA: Xia Huabing, 2002. First Edition. Paperback. New. Square 8vo. 8 1/4 x 7 1/2 inches. [i], [vii], (103), [1 blank] pp. Text in Chinese, illustrated with black-and-white halftone photographic illustrations throughout; text clean, unmarked. Perfect bound printed wrappers with a photographic portrait of the author on the front cover; binding square and tight. HN721-001. Fine. FIRST EDITION. My father-in-law's autobiography. A Chinese immigrant's tale, of how he was converted to Christianity by American Assemblies of God missionaries in Hong Kong during World War II, how he went to Canada for training for the ministry, and his ministries in Hawaii, Southern California, and the San Francisco Bay Area. Howard Wa Ping Ha eventually built-up a radio ministry that made him a well-known figure in the Bay Area Chinese-American community. Worldcat shows one copy at Stanford University. (Inventory #: HN721-001)
$50.00 add to cart Available from
John Howell for Books
Share this item