Letter by a Private in the Union Army, Harrison's Landing, Virginia 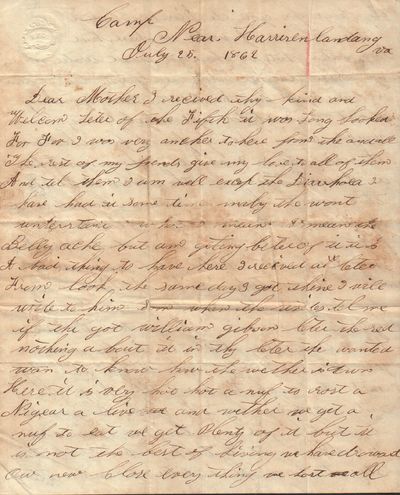 by Jones, Owen
Good. Manuscript letter written by Private Owen Jones while camped at Harrison's Landing during the Civil War. Headline reads "Camp near Harrisen Landing, Va, July 25, 1862." Letter measures 6 ¼" x 7 ½" and is 4pp. Envelope is missing. Letter has moderate soiling and toning. Jones has many spelling mistakes and his handwriting can be hard to read at times. From information mentioned in the letter Owen Jones was a Union soldier, likely a private in the Pennsylvania Reserves under General Truman Seymour. The letter was written at the end of July. During July and August of 1862 about 140,000 Union troops camped at Harrison's Landing, Virginia. At the beginning of the letter Jones mentions that he is well, except for the diarrhea. Poor water and hot weather were likely the cause of most sickness. Jones states "we have had poor water but we have got good water now. We have dug a well we had to dig 30 feeat"; he then uses a racial slur while describing the weather. Jones also writes, rather treasonously, about his commanding officer: "Generl Seymore he is a tirant he has got ragler[regular? ] snakes in[? ] if we get in a fight. I think he will be missing for all the men swars they will kill him." He ends his letter by saying "Tel Pap to be a cuntry home gard. Let some of the yong men come [, ] if they would come it would be over the sooner." . (Inventory #: 022909)
$125.00 add to cart Available from
Back of Beyond Books
Share this item

Museum of New Mexico , 1973
(click for more details about Photographers of the New Mexico Territory, 1854-1912)
View all from this seller>