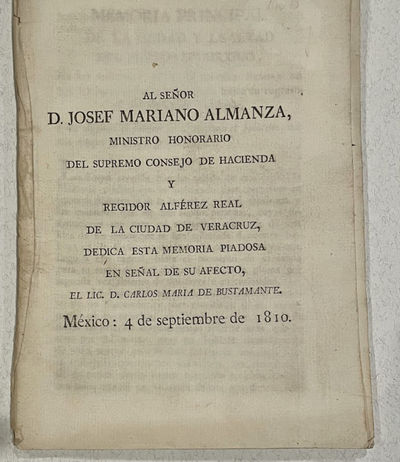 by Bustamante, Carlos Maria de
Mexico City: n.p., Sept. 4, 1810. First printing. Quarto, pp [2], 52, self-wrappers. Bustamante (1774-1848] was a prominent liberal and polemicist for the cause of independence from Spain, rejection of Iturbide's claim to be emperor, wrote speeches for Morelos and published numerous historical works, editing important works of others on the history of Mexico that had never been published. This is an early work of his, at a time when he was known entirely through his journalistic work, and published just a few days before Fr. Hidalgo would begin the war of independence from Spain. It is unique in its kind, as it is a lengthy historical description of the cult to the Virgin de los Remedios and in particular of a procession of her image from the sanctuary church where she was (is) reserved as a shrine, to the center of the city of Mexico, i..e. the Cathedral. Description is given of the passage through all the towns and villages in which the image passed - the preparations, attendance and receptions given. The occasion of the procession, as Bustamante says, was the bloody war in Spain against Napoleon and, more specifically the drought in Mexico which had caused the price of grain to increase to unheard of heights. (It is said that the Virgin de los Remedios was brought out in procession for droughts, and the Virgin de Guadalupe for floods.) The pious nature of this pamphlet, which Bustamante signed as "un esclavo de Maria", was such that it brought forth an encomium from Beristain de Souza (a rabid conservative) in his Biblioteca, in which he notes with approval its departure from the usual irreligious tone of the author. Rare in library holdings (8), and quite rare on the market (the Mathes copy which was described as soiled and dampstained). Quite nice copy, sewn, unbound. Condition is fine. (Inventory #: 7582)
$500.00 add to cart Available from Plaza Books
Share this item

Manuscript Legal Document Consisting of a lawsuit brought in the case of two haciendas - San Nicolas Tolentino and San Cayetano - and the Mill of Belen in the towns of San Andres and Tepeaca.


<
(click for more details about Manuscript Legal Document Consisting of a lawsuit brought in the case of two haciendas - San Nicolas Tolentino and San Cayetano - and the Mill of Belen in the towns of San Andres and Tepeaca.)
View all from this seller>