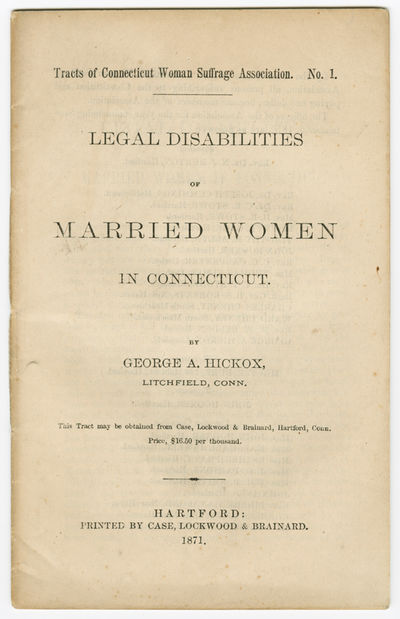 by Hickox, George A.
Hartford: Case, Lockwood & Brainard, 1871. 40pp. Original printed self-wrappers. Minor foxing to outer leaves, light toning. Very good. A scarce political tract on women's suffrage by George A. Hickox, a Litchfield, Connecticut lawyer, newspaper editor, and women's suffrage advocate. At the time he wrote the present pamphlet, Hickox was one of the vice presidents of the Connecticut Woman Suffrage Association, along with Harriet Beecher Stowe and a dozen other women's suffrage supporters. In the present essay, Hickox employs his legal acumen to clarify the position of women within the marriage laws of Connecticut, dividing his summation into three sections: "I. The wife's personal subjection to the husband. II. Her want of legal authority over their children. III. Her property." He then provides a detailed legal analysis of each portion, and concludes that "The wife should be given entire control of her own person, joint authority with her husband over the children they nurture, and over the property they accumulate." Hickox characterizes the inequality between husband and wife, and the resulting absolute dependence of the wife on the husband, as an "evil" which "affords the tyrannical husband every opportunity for oppression." He argues for "wise legislation" to correct this imbalance and dependence, and "concede to the wife the independence she earns in the Family." (Inventory #: WRCAM56822)
$950.00 add to cart or Buy Direct from
William Reese Co. - Americana
Share this item