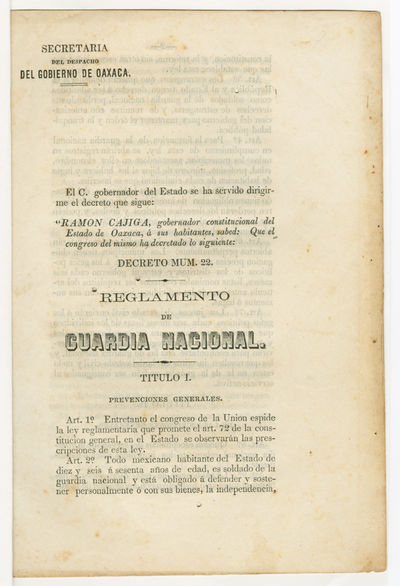 by [Mexico]
[Oaxaca, 1861. 10pp. Later plain white wrappers. Minor foxing, a few small wormholes in text just touching some letters, one wormhole in lower margin not affecting text. Overall very good. An unrecorded Mexican imprint containing the rules for the Mexican National Guard, issued the same day that the European Tripartite Alliance seized Veracruz at the beginning of the Second French Intervention of Mexico. The regulations were printed in Veracruz's neighboring state of Oaxaca, which saw its own share of military action between Mexico and France during the intervention period between 1861 and 1866. The rules for the Mexican National Guard are organized in nine sections, including general precautions, the divisions of the guards, regulations for guard duty, organization of the guard, the mission of the guard, and more. The organization of the guard is generally divided into infantry, cavalry, and artillery.

In the early 1860s, Mexico owed large sums of money to French, British, and Spanish creditors. Debt payments were suspended by Mexican President Benito JuÃ¡rez in the summer of 1861, and this move did not sit well with the country's European debt holders. This resulted in a Tripartite Alliance between France, Great Britain, and Spain to recover their money, and a naval operation by all three nations was organized. Shortly after arriving in Mexico, Great Britain and Spain withdrew from the alliance after discovering France's true, imperialistic motive - to establish a French regime in Mexico. The result was the Second French Intervention of Mexico, a series of battles and political clashes between Mexico and France that would range across the country until 1866. The United States, by then entangled in the Civil War, was none too happy about this European interference just south of its border and threatened war against France if they did not withdraw. Ultimately, the French-installed Emperor Maximilian would reign from 1864 until his execution in 1867.

We could locate no other copies of the present pamphlet in OCLC or the trade. (Inventory #: WRCAM56825)
$1,500.00 add to cart or Buy Direct from
William Reese Co. - Americana
Share this item